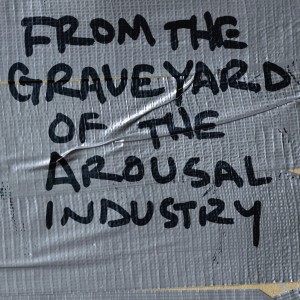 As an adolescent, Justin Pearson moved with his mother from “Shit Creek Phoenix, AZ” to sunny San Diego after his father was murdered on Halloween. There, he fell in with a subculture of young musicians playing some of the most original and brutal music in the world. Turns out the chaos of Pearson’s bands—The Locust, Swing Kids, and Some Girls—is nothing compared to the madness of his life. ….

An icon of the West Coast noise and punk scene, Pearson managed to arrive at adulthood by outsmarting skinheads and dodging equally threatening violence at home. Once there, the struggle continued, with Pearson getting beat up on Jerry Springer and, on more than one occasion, chased out of town by ferociously angry audiences…..

From the Graveyard of the Arousal Industry is the outrageously candid story of Pearson’s life. In loving, meticulous detail, Pearson gives readers the dirt behind each rivalry, riff, and line up change. ….

If Eddie Haskell had lived next door to Slayer instead of the Cleavers, he might have ended up like The Locust’s Justin Pearson….

Vocalist, lyricist, and bassist Justin Pearson’s bands, past and present, include The Locust, All Leather, Some Girls, Holy Molar, Swing Kids, The Crimson Curse, Head Wound City, Ground Unicorn Horn, and Struggle. He runs the independent record label Three One G. Traveling worldwide with his bands, Pearson has encountered many strange things in his time. He lives in San Diego…..

Advance Praise for From the Graveyard of the Arousal Industry:

“Showbiz never looked so violent yet cheery, chaotic yet level-headed. Justin Pearson is a lovely lunatic who writes with kindness even if he’s describing being in the middle of an on-stage brawl. He may pick the wrong girl and never be able to escape the mayhem in his personal life but he still seems kind of perfect . . . in a twisted way.” —John Waters

JP’s writings are as inspiring as they are brutally honest, filled with amazing tales of beating odds and getting beat. A true punk legend. -Nick Zinner

Scraping the ground where the barrel of life used to be, Graveyards is an offensive, charming, funny and most importantly, a sincere look at a life you couldn’t make up. – Rob Moran

“After reading his book, I’m convinced that Justin Pearson offers one of the best reasons to not do drugs… the dude can remember every nuance of his twisted upbringing which not only makes for interesting memories on behalf of the author, but an even more interesting read for we, the people. A truly visceral account of the life of one of punk rock’s more obscure excrements.” – Travis Ryan

“Most punk autobiographies are written late in a rockers life. Justin Pearson has wisely chosen to write his way way way before the self-aggrandizing memory loss tipping point – thats 33 years old for druggies, 87 for straight edgers. At the risk of being called a fag and getting beaten up by jocks, I would like to tell everyone to read this wonderful trashy book. If you live in San Diego you might want to wait awhile. I’m pretty sure names and places have NOT been changed.” – QUINTRON

Reading From The Graveyard Of The Arousal Industry is like buying a ticket to the amusement park that is Justin Pearson’s brain. Pay the admission and experience the life and inspiration of this incredibly unique and prolific artist. -Eric Paul