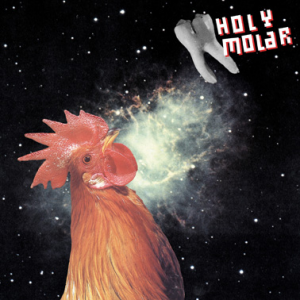 Holy Molar is much steeped in myth. Formed in 2001, the band released their first EP, which, for all intents and purposes, documented the five-piece playing a live set at a local correctional facility and the subsequent bloodthirsty riot that raged afterward. Or did it? A year later Holy Molar resurfaced with a batch of new songs for their S/T bloody tooth picture disc 10″ EP. The Band was becoming more than a side project for these self proclaimed “dentists”. Even though their list of previous or current projects stretches a mile long; The Locust, Cattle Decapitation, Das Oath, All Leather, Head Wound City, Swing Kids, Get Hustle, Heroin, Some Girls, Crimson Curse, Final Conflict, VMW, Antioch Arrow, Charles Bronson, and so on, they still have made this tooth the Holiest of Holy. This release is a double 3″ gatefold CD. It even has two “hidden” tracks if they can be found.