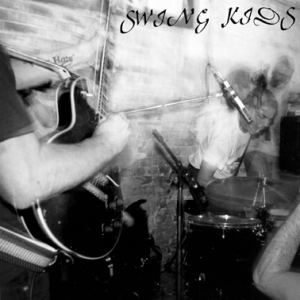 I Hung Around In Your Soundtrack Pt. 6 by Justin Pearson

By 1995, I started to realize that the music industry was shifting more and more, even within the odd underground subculture(s) I was among. It seemed to be the time to release Three One G’s first CD. I was on tour in Europe for my first time, stuck in some small town in France that I can’t recall. The “booking agent” we used failed to book a two-week gap of shows, forcing us to convince someone we had met at a show there to house us for the time being until the rest of the shows picked up. I remember one night, Eric Allen and I were trying to figure out what we should do as far as the Swing Kids material, which there was not much of. We were talking about a five song EP and three songs from a split 10” we did with Spanakorzo, and even with those tracks in consideration, one of the songs was a cover. It was odd and, in retrospect, pretty pathetic that we wrote such little music. We did have one unreleased song, which we were planning on using for a split 7” with Mohinder. Apparently, James from Jenny Piccolo was trying to get Mohinder to track some unrecorded material, but it never panned out. With us realizing our situation, the Swing Kids song we were sitting on was easily our best one out of the songs we wrote. We were just getting into our own skin. The music was a bit more abrasive, and a bit more thought out.
For reasons somewhat beyond our control, the band didn’t seem to have much of a future at that point. Jose was planning on moving out of San Diego, to further his schooling up in the Bay Area. Also, I think that Eric and I both knew people really didn’t like Swing Kids at the time. It was a constant uphill battle to prove something– something we were never even sure of. Even the people who were into Eric’s other band, Unbroken, could not have given a shit about Swing Kids back then. Oddly enough, Eric really wanted to get away from that style of music Unbroken had made home of, and the scene that it fell into. At the time, we were all changing and trying to find something new for us to do, musically and otherwise. We were all into such weird music and art. Eric was really getting into stuff that John Reis was doing, and I was getting more and more into brutal music, deciding to start The Locust.
The Europe tour was really fucked up for us, but we had nothing to base it off of. We hadn’t even done a proper US tour, so for most of us in the band, it was just a shit show with little to no expectations. I remember us always stealing shit, shoplifting, and trying to figure out a way to pay my grandmother back for the money she loaned us to fly over there. The majority of the shows were a complete waste of time.
But just at the tail end of the tour, we finally hit the Iper Fest in Belgium, which featured mostly crappy second-rate hardcore bands. Chugga-chugga was all we heard for the two days we were there. Somehow, we were placed at the end of the fest. I suppose it was so that people stuck on youth crew and other obvious sub genres that we had no interest in (and who had no interest in us) could leave and not have to sit through our set. But for some strange reason unknown to me, I feel like we played out best show ever. It was packed with a mix of people from all over Europe, and seemed to be all the weird-o’s and freaks who were also trying to find something different. It was the first time I had felt that level of intensity in music that I was part of. We were communicating with telepathy, and the energy from us in the band, as well as the crowd, was new to all of us. The show was captured on DVD and featured on Three One G’s “This is Circumstantial Evidence” years later.
We finished the tour and stopped playing for the time being, only to play a couple more Southern California dates a few months later, when Jose came back to San Diego for a break. The last couple shows were easily our best. People finally were taking a liking to what we had done, and we had introduced Jimmy Lavelle on second guitar (which we should have done a lot sooner, in my opinion). Around this time, Eric and I put the CD together, using a live photo from the Iper Fest for the cover. We sequenced the 9 songs in a different order than they were featured on their respected vinyl releases and threw it out there as Three One G’s first CD release. We pressed it frequently, but eventually stopped as the times changed and shifted back to vinyl being the preferred format for physical albums. At one point, we did a limited run of the discography as a picture disc LP through Erika Records, which has since sold out.
As much as I dislike my contribution to the band, those were some of the best and weirdest times in my life. I love those guys in the band with all my heart and am glad I was with them when I was growing up. It was a stepping-stone for me, for my contributions to future projects, for Three One G as a label, and has somehow found a strange place in time for some who have discovered the band.