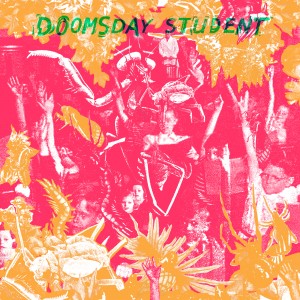 In the unhinged tradition of Arab on Radar & Chinese Stars, Doomsday Student caterwauls like four refrigerators dropped down an elevator shaft. As drums push the music forward, spiraling guitars & crazed singing use the tools of rock to dismantle rock, to make an alarm of rock, to make simultaneously songs with hooks & riffs & all that shit & also these little splitting-off universes of paranoia & hysteria & the ecstasy only exploding people truly feel.

When I listen to A Walk Through Hysteria Park on headphones in public I find myself laughing in that way that makes people cross the street away from me, that makes my spine feel made of broken bottles & soaked band aids. And I am better this way. I am more awake, more able to be in the terror & jaggedness & joy of what it is to be. Doomsday Student is a wake up call to anyone who thinks the world merely works.

– Biography by Mathias Svalina, author of Destruction Myth, I Am A Very Successful Entrepreneur, and The Explosions

Track Listing:
1. Disappearing
2. Murder In The Kitchen
3. Suburban Awards
4. You And Your City Teeth
5. The Lean
6. I Piss Sunshine
7. Four Knuckles
8. Hunting For A Headshrinker
9. Lifeboat Blues