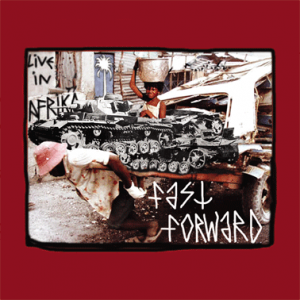 Fast Forward formed around 1999 in L.A, CA and is known for their controversially political live shows. Includes mysterious members with ties to such organizations as Wrangler Brutes, The Locust, Nazti Skins, One Day As A Lion, and Le Shok. The band has two previous releases on Vermiform and KOTM.

T Cells are from Long Beach, CA and were formed around 2002. Including members of The Locust, Le Shok, One Day As A Lion, The Distraction, and Nazti Skins. Their music is Lo-fi electronic, pulsing noise pop? This record includes a cover of Cime’s “Maserati”. T Cells also have a self-released 10″ on SPS Records.