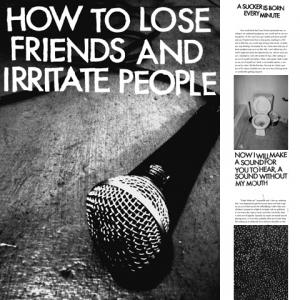 In his new book, How To Lose Friends and Irritate People, Justin Pearson reveals his misadventures with two DJ duos borrowing him as a frontman, lending some “punk” street cred to their music. Known for being part of bands like The Locust, All Leather, and Retox, as well as the owner of Three One G Records, Justin has paved the way for bizarre, abrasive and political music, while pushing the envelope of what is expected or what can be done in a band. The Bloody Beetroots and Designer Drugs approached him to sing on their albums, and what came out of those two experiences is both pathetic and hilarious. From being forced to lip sync at Australian festivals in front of thousands, to being lost in the woods somewhere in Pennsylvania at a music video shoot gone wrong, Justin questions not only the DJ’s motives, but his own as well. Embracing actual musical instrumentation instead of laptop playlists, Justin trudges through the murky waters of musical capitalism.

How To Lose Friends and Irritate People is comprised of two stories, “Now I Will Make a Sound For You to Hear, A Sound Without My Mouth” and “A Sucker is Born Every Minute”, originally separately bound in each own’s book, as well as a flexi record in each book featuring All Leather “We Eat Gauche Caviar” and Ill Saint M “A Pig’s Orphan” (featuring Justin Pearson). All parts bound together as one, creating more than just a book, but a collectors item, artifact, and maybe even an all around “fuck you” to Kindles and digital downloads. The book has since been reprinted as one novella, featuring only one of the Flexi postcard records as part of the packaging.

Praise for ”How to Lose Friends and Irritate People”…

“Justin Pearson occupies a unique niche within the world of underground music in America. As a member of polarizing bands such as The Locust and All Leather, he’s become synonymous with music which redefines the limits of technical prowess while blurring the lines between punk, noise, experimentalism and outright assault. As a lyricist and author, his aggressively contrary attitude and at times hilarious commentary on the scuzzy reality of do-it-yourself culture provide a glimpse into the mind of an artist whom, one could argue, has effectively used the underground to his advantage for close to 20 years. Which isn’t to say he’s an opportunist. You’d be hard-pressed to find anyone contributing back to the culture from whence they came with the consistency and dedication Pearson exhibits year after year. Wearing his ideals on his sleeve, he is an icon within the punk scene – a cantankerous, shape-shifting, immaculately-groomed hybrid of old attitudes and new. With punk as his platform, Pearson has crisscrossed the globe endlessly, experiencing people and places from a vantage point few others could imagine. His writing sheds light on the mostly unglamorous reality of rock (anti-) stardom in the twenty-first century, free of the typical clichés of hotel rooms destroyed and groupies disrespected. Pearson’s life and art are case studies in DIY and few, if any, put their money where their proverbial mouths are with such aplomb”. – Sonny Kay

“For some reason, outspoken iconoclast Justin Pearson constantly finds himself dead center in a whirlwind of chaos. His unique energy and steadfastly rebellious outlook tends to explosively catalyze every situation he enters, resulting in hilarious, sometimes utterly tragic results. His hair raising decents into the moronic chasms of DJ culture are no exception. Underneath the party lights, gallons of sweat and an avalanche of “bass” there lurks a milieu diseased with brain dead idiocy, logistical incompetence and corruption. Can idealistic Justin withstand the karmic horror of this particularly mentally-retarded avenue of mainstream culture and survive with his integrity, health and soul intact? Reading these two harrowing tales will clearly reveal the answer. Justin always takes big chances in life and more often than not, the outcome is as absurd as it is riveting.” – Weasel Walter

“Justin Pearson is back with more tales from a life stranger than fiction. In this new work, Justin takes us along for a ride on his ill-fated Australian tour with the Bloody Beetroots in front of 15,000 sweaty/screaming bodies whose idea of anarchy comes more from American Apparel than Emma Goldman. In another story, after many hours of driving in a crowded van with a bunch of beer-drinking-beef jerky eating kids on the way to a video shoot that may or may not involve a live goat, we arrive to the location of the shoot: a remote forest somewhere in the state of Pennsylvania. JP tells each story like no one else could–mainly because no one else gets himself into quite the same kind of misadventures as he does.” – Jose Palafox

“Mirabile dictu! I find myself riding shotgun with no seat belt on, staring out the window trying to inch my way closer to the wreckage of each adventure .”- Cedric Bixler Zavala

“If ever you find yourself lost in that murky abyss between triumph and failure, personal politics and paycheck, let these words of wit and wisdom from Justin Pearson serve as your guide.” – Jordan Blilie