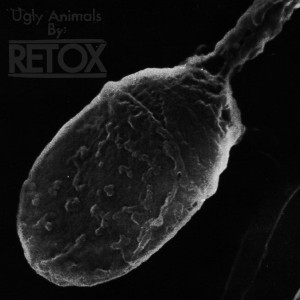 All that matters in the grand scheme of things is the band is not directly comparable to what has come before them. But if we must: RETOX is an outcome of stagnant and boring western culture, as well as the self-proclaimed counterculture, which has slipped into a sea of pointlessness. The band manages to detach themselves from what one might consider a promotional paragraph trying to explain what is not really important to the band themselves; such as a list of influences – they are influenced by much more than music, but more so by the world at large. The band has no goal for what the future holds. Sonically, the band’s crude and primitive aspects make sense in this day and age. The band is a reaction to the world that the members and their comrades have lived in: shitty childhoods, bureaucratic frustration, and the overall justification of continuous war. That sensibility coupled with a modern artistic delivery, the music is educated as well as furious, and most importantly, blurring genre lines of punk, hardcore, thrash, metal and whatever else seems fitting to the critics. RETOX features members of some grand dick sucking accomplishments, acts such as The Locust, Head Wound City, Holy Molar, All Leather, Some Girls, Swing Kids, Le Butcherettes, Cattle Decapitation, Struggle, The Festival of Dead Deer, and The Crimson Curse.

Track Listing:
1. The World Is Ending, And It’s About Time
2. Thirty Cents Shy Of A quarter
3. A Bastard On Father’s Day
4. A Funeral on Christmas Sunday
5. Stick A fork In It
6. Cement Sucking
7. Boredom Is Counter-Revolutionary
8. Ten Pounds Of Shit In A Five Pound Bag
9. A Captive Audience
10. Sorry We Are Just Not Compatible
11. Piss Elegant