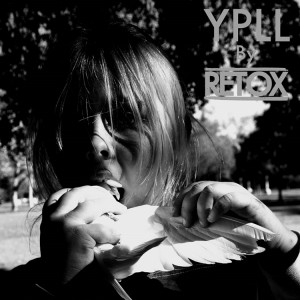 RETOX deliver a mission statement in 12 blistering tracks, the vast majority of them clocking in at two minutes or less. It’s the type of rallying battle cry that inspires lingering and dormant primal urges and too-long-suppressed societal dissatisfaction in those who encounter its punk rock lineage and postmodern crash-and-ban.

Tracks like “You Lost Me At ‘It Wasn’t My Fault,'” “Greasy Palms” and “Nose to Tail” are all filled with immediacy, urgency and restless energy, no matter which tempos RETOX happen to be pummeling in the songs. “Congratulations You Are Good Enough” features guest guitar work guitarist Nick Zinner of the Yeah Yeah Yeahs, whose fretwork jumps aboard the careening song. The track builds to a punk rock crescendo with crystal clear production that amplifies every crackling nuance of the band’s delivery.

Subcultural iconoclast and artistic visionary Justin Pearson is known in critical circles, amongst contemporaries across a wide variety of genres and to fans of incisively incendiary artistic expression around the world as one of the guiding lights of the groundbreaking outfit THE LOCUST. He resurfaced on record alongside gifted guitarist Michael Crain, dynamic bassist Thor Dickey and powerhouse drummer Brian Evans.

YPLL takes the ugly powder-keg promises of the band’s impressive debut and ratchets up the proceedings exponentially, quickly given all who fall under its spell ample evidence as to why friends and contemporaries who have played with Public Image Ltd., Nine Inch Nails, Killing Joke, Man Is The Bastard, Swing Kids, and The VSS count themselves among the bands supporters and comrades. Otis “O” Barthoulameu (Fluf, Olivelawn) coined a phrase for what RETOX have summoned forth: “New Confrontation.”

Pearson himself offered this explanation for Retox’s new album’s creative combustibility: “YPLL is something that four very odd humans placed together as a reflection of the art due to the worlds we live in.” Incredibly well thought-out, highly educated, impossibly practical, Retox’s YPLL uses the power of the riff and the passion of the scream to conjure diatribes about the human condition. As Pearson notes, producer Chris Rakestraw, who has worked with heavy metal luminaries and postmodern hardcore heroes alike, “Brought out aspects that the band has previously not honed in on, resulting in music for the future yet to come.”

“While writing YPLL, we were particularly focused on riffs and simpler song structures,” explains Crain. “Not so much on the extras, such as effects and layers of guitar, but more on an actual song’s flow. The guitar lines, kick drum, and snare are definitely driving the ideas home while the bass guitar is the glue holding it all together. And the vocals are telling each song’s story. We really just wanted to keep it simple and make everything fun to listen to. Chris definitely honed in on this.”

1.Modern Balls
2.Mature Science
3.Don’t Fall In Love With Yourself
4.You Lost Me At “It Wasn’t My Fault”
5.Congratulations, You Are Good Enough
6.Soviet Reunion
7.Greasy Psalms
8.I’ve Had It Up To Here I’m Going To Prison
9.The Art Of Really Really Sucking
10.Biological Process Of Politics
11.Nose To Tail
12.Consider The Scab Already Picked