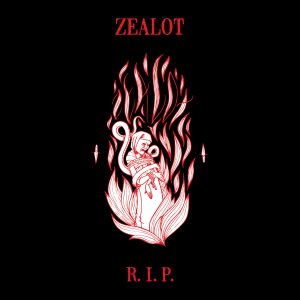 Zealot R.I.P. started years ago when life-long friends, Jason Hamacher (Frodus, Battery, CombatWoundedVeteran) & Mike Schleibaum, decided to collaborate and write music that’s fast and heavy. Between Schleibaum’s relentless touring in Darkest Hour and Hamacher’s extensive documentary work in Syria, it took a few years for them to settle into a sound that’s somewhere between Entombed and Born Against. The band was recently solidified with the additions of Pig Destroyer’s Blake Harrison and Fairweather’s Peter Tsouras. This metal amalgam, upon forming, went immediately into the studio and recorded a handful of songs that are brutally unhinged.

The self-titled EP was recorded recorded/mixed by Mike Schleibaum at The Riff Dojo. It’s available as an ultra limited edition 12” EP on vinyl through Three One G Records as well as digitally.

Self-titled EP:
Magnetic Field of Dreams
The Extinction of You
Worship the Serpent