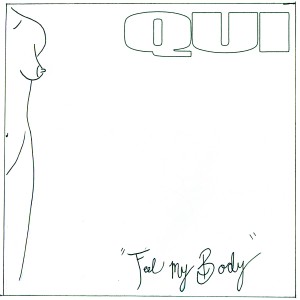 Although there are certainly some auditory differences between the two, it is no mystery as to why these bands would share a musical space. The two duos excel at creating experimental material as hard-hitting as not only any four or five piece band, but as an entire cacophonous army.

Coming off their third full-length after five years with “Life, Water, Living…” in February of 2014, Paul Christensen and Matt Cronk have returned to their original lineup as a pair for the Side A single entitled “Feel My Body”, a track thick with heavy, catchy bass lines and harmonious vocals coupled with manic screams. Qui continuously manages to create a dichotomy of composure and craziness in their music that grabs the listener, immediately makes itself at home in your head, and remains there for the foreseeable future.

Secret Fun Club, featuring Sal Gallegos and John Rieder, contribute the B side track, “Pinche Harmonics” which immediately starts off brutally heavy, and fluctuates throughout from there onwards, changing tempos from slow and sludgy to recklessly fast, with wild and uninhibited solos interspersed throughout. The music almost comes across like a sinister stream of consciousness experiment, all the while flowing flawlessly. This is the band’s newest material since the release of Three One G’s Skull With Antlers LP (2012), another similarly aggressive, heavy, and all-around unique effort.