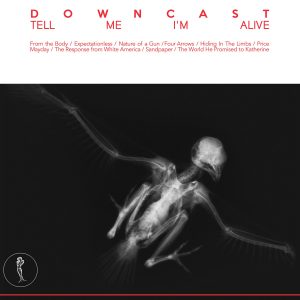 On this new record, their first in 25 years, Downcast offers a set that reflects that pivotal moment from years ago. Some of these songs, like “Sandpaper” and “Price”, were left unrecorded and you can hear where the band was going in their final days, laying wrenching emotion on top of dissonance and big chords. These songs still pull their weight.

As members Kevin Doss, Greg Doss, Brent Stephens, and Sean Sellers have evolved as musicians and humans over the last two and a half decades, the band builds on their foundation. “Four Arrows” draws listeners into the myth of California, and its present-day connections to the state’s violent beginnings. The oppression of indigenous peoples hasn’t ended at all, despite the attraction of its cities and the recreation in its landscapes. “Hiding in the Limbs” faces down the CEO’s of today’s big gun manufacturers, placing them all at the scene of every mass shooting. With so many dead, and the dollars still pouring in, it’s time for an accounting.

On the track “The Response from White America”, the band summons the real voices of African American mothers and fathers who plead with white people to care about the violence inflicted on their children. The last song of the album, “The World He Promised to Katherine”, about a terrible personal tragedy, aspires to the kind of catharsis that the band achieved in their live sets with the song “Hope”.

This isn’t light music. Downcast gets its weight from its style and its substance. This might not be for everyone, and that’s just fine. But, as both activism and hatred rise again and a new generation faces menacing uncertainties, this is exactly the weight that the current cultural moment requires.

Track listing:
From the Body
Expectationless
Nature of a Gun
Four Arrows
Hiding in the Limbs
Price
Mayday
The Response from White America
Sandpaper (A Song for Still Life)
The World He Promised to Katherine