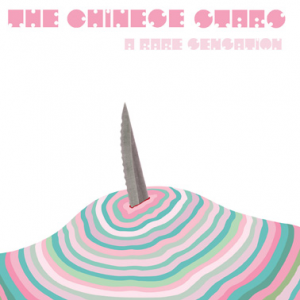 The Chinese Stars have made a serious name for themselves as well as a legitimate mark in the realm(s) of useless genre descriptions such as rock, punk, indy, and even no wave. From the ashes of Arab On Radar and Six Finger Satellite arose The Chinese Stars. The Stars include Craig Kureck (drums) and Eric Paul (vocals) formerly of Arab On Radar, all ready legendary for disbanding at the height of their popularity, and after achieving renown status as one of the most innovative bands of the last decade. The Chinese Stars also include Rick Pelletier (bass) formerly of Six Finger Satellite, a band considered far and wide as the “Founding Fathers of Chaos” and the mysterious Paul Vieria (guitar). The band has also managed to releas albums with our comrades, Skin Graft. A Rare Sensation’s art work done by Neil Burke of (Men’s Recovery Project).