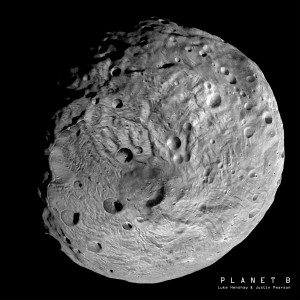 Dropped down amongst the knobs and dials of Penguin Studio in San Diego, rogue avatars Justin Pearson and Luke Henshaw have created a new project in the form of Planet B, with the shared purpose of creating music both mischievous in sound and sobering in message.

The first artifact from the preternatural duo comes in the form of this “Wrong Utopia” 7” single. Featuring two tracks, both can be heard almost as otherworldly anthems: catchy, heavily percussive, and eerie all at once. Pearson sneers lyrics that present the viewpoint of an outsider looking on at his surroundings: “Sell a good bad luck charm/ watch them hurt their own arm/ shaking their bloody fist/ in the world of the nihilist,” seemingly uninterested in taking part and instead deciding that “’Tween the moth and the web, I’ll make a new landmark.” This is interspersed with Henshaw’s fantastical sci-fi accompaniments: whistling UFO vibrato, dark and distorted electrical hums, and marching band drum beats. Basically, “Wrong Utopia” has all the makings of your next interdimensional ear worm.

Side 2 of the single, “Join a Cult”, has a more foreboding sound, a sort of thunderous and creepy call to arms. This is in large part due to the booming drums, live wire buzzes, and digital echoes that brings to mind an oncoming swarm of mechanical insects headed straight for the song’s settings of burning houses and dry fields, “the one without a view”. This is all punctuated by whimsical bells that are unsettling in the context of the song, much in the same way that hearing a child singing in a horror movie is.

Track listing:
Side 1: Wrong Utopia
Side 2: Join a Cult