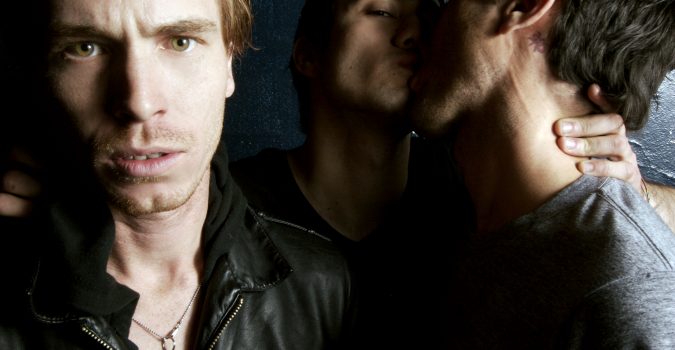 Imagine attending a dance party that was suddenly overshadowed by a brutal barrage of doom and destruction. Think loud, heavy distortions and sharp, grating guitars. Picture bitter, angry shouts fused with sexual slurs emitting somewhere out of a sea of shirtless guys in tight, black pants. With this in mind, you may have a vague idea of what you’re about to be in for when listening to All Leather. Hailing from the streets of Mexicali and San Diego, All Leather consisted of Nathan Joyner on guitar, Jung Sing on drums, and Justin Pearson on vocals (Joyner and Pearson had previously been bandmates in hardcore punk collective, Some Girls). The genre is self-described as a bluntly stated, “annoying”.

In addition to being represented by Three One G, multiple albums have also been released through Dim Mak Records, starting with the five song EP, “Hung Like a Horse” in 2009. “Hung Like a Donut” followed not long after, which was a compilation of various remixes of their songs by musical contributors Otto von Schirach, Nick Sarno, His Majesty Andre, S.P.A, Sqzmylmns, and Congorock.

In 2010, the band released their first LP, the aptly in-your-face entitled album, “When I Grow Up, I Wanna Fuck Like a Girl”, inspired by an Antony Hegarty interview Pearson had heard. Totaling a relatively ephemeral 23 minutes, the ominous electronics and laser-like synth over pounding, gritty bass beats and drums fully manage to hit you like a brick. Tracks like “Dear Mother Nature, Drop Dead” and “Well Fed Fuck” bring stereotypical dance music to a new and amazingly dark place. And yet, despite the foreboding sound, throughout all of All Leather’s music, there is simultaneously an air of humor to it as well (especially apparent in their various music videos, from “Mystery Meat” to “I Don’t Hate Fags, God Does”), giving the distinct impression that the trio is deriving great pleasure from irritating and/or confusing you, openly not giving a fuck how anyone perceives their full frontal assault on musical norms.

Perhaps it is in part the admirable lack of concern for what others might think about their experimental take on the electronic dance genre that brought them considerable notoriety. The band has been remixed by the likes of notorious acts such as Japanese hardcore Melt-Banana, the Yeah Yeah Yeah’s Nick Zinner, and even an unlikely collaboration with Italian electro house duo The Bloody Beetroots, which gave way to an amusing tale chronicled in JP’s memoir “How to Lose Friends and Irritate People” (released by Three One G in 2011, along with a two flexi-disc recording of All Leather’s “We Eat Gauche Caviar”).

All Leather went on an indefinite hiatus in early 2012, due to the inconvenience caused by the logistics of getting members together for recording and writing new music, but returned in full force in 2014, first with the release of a 7” single entitled “An Insufficient Apology”. This single maintains the warped-post-apocalyptic-electronic genre they already claimed, but with quite possibly an even darker and heavier sound than their previous releases in the form of a title track as well as a cover of Dave Van Ronk’s tongue-in-cheek American Folk protest song, “Luang Prabang”, re-imagined from All Leather’s unique perspective: with snarling grit and electronic grime.

In the same year, the band worked on an LP entitled “Songs of Hate”. For this new material, they expanded their lineup with the addition of Alia Jyawook (of Hot Nerds) on synthesizer, and incorporated a hybrid acoustic-electric drum kit, ever-diversifying and adding nuance to their sound.

Outside of All Leather, Joyner and Pearson continue to collaborate in their two man production team, Three One G’s Leg Lifters. Joyner and Jyawook additionally play in San Diego-based Hot Nerds, and Pearson divides his time creating/playing with Retox, The Locust, and even Head Wound City, among a plethora of other projects. 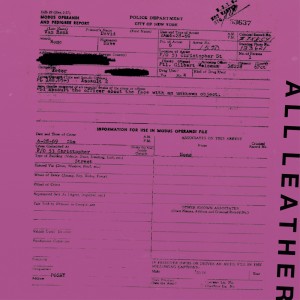