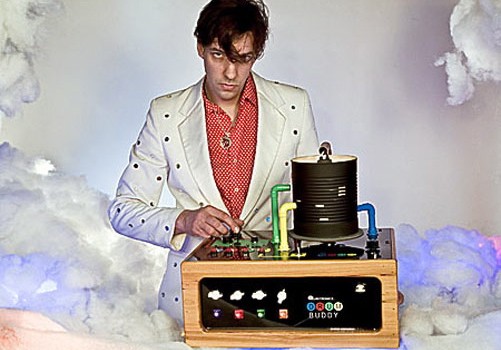 “Mr. QUINTRON is a concert and nightclub organist from New Orleans, Louisianna. He plays a type of music the press has dubbed “Swamp Tech” on a custom Hammond / Rhodes combo organ which has been built up to look like a classic muscle car with actual working headlights. All this organ noise is backed by irresistibly raw drum machine beats (think 8 bit Booty-Bounce chanelled thru the hands of a Troglodyte) and his own patented invention THE DRUM BUDDY – a rotating, light-activated analog synthesizer which is played much in the same way that a DJ spins and scratches records. Celebrity Drum Buddy owners include LAURIE ANDERSON and NELS CLINE of Wilco.
Much of Quintron’s music is driving, hypnotic Sixties dance music a’la the Seeds or Standells. However, don’t mistake Quintron for being totally squaresville retro. He has benefited from 40 extra years of music history to develop his own richer style and borrowed from a number of other genres to become…well, Quintron. But he has faithfully retained that Sixties garage essence, a precarious balance between wholesomeness and worldliness that fell apart after the Summer of Love.

The Quintron / Miss Pussycat experience is one of barely controlled electronic chaos, “Swamp-Tech” dance beats, small explosions, incredible clothes, and entertaining puppet stories. You can see them perform regularly at the Spellcaster Lodge in New Orleans, Louisiana or on one of their many tours around the world. This act somehow has equal relevance in sleazy nightclubs, pizza restaurants, and university lecture halls.” 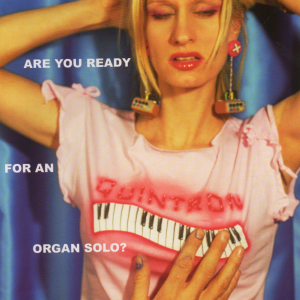