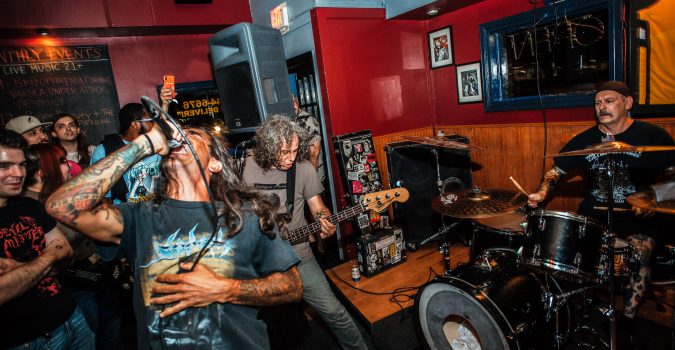 UNDER ATTACK is a band focused on “vicious precision hardcore” made up of vocalist Alex Copeland, guitarist Mark Telfian, bassist/vocalist Jason Hodges (Suppression, Oozing Meat), and drummer Dave Witte (Municipal Waste). Collectively, the band has an extensive “ex members of” list including Limp Wrist, Discordance Axis, Human Remains, Hail Mary, Eucharist, and many, many more. The band began a few years back, when Dave Witte and Mark Telfian connected at a party in Richmond, VA. After many meetings at Dave’s food truck, Go Go Vegan Go, they talked about forming a brutal hardcore band with no gimmicks, in the spirit of predecessors like Negative Approach, Straight Ahead, and, in general, old school 80s punk and hardcore. After figuring out two other old friends to bring into the mix, the band started practicing nonstop in February of 2019. By March, they recorded a 5 song demo released in the US on Vinyl Conflict and in Europe on AutoReverse. In August of 2019, their first 7” came out on Iron Lung Records called “Through the Blade.” In February of 2021, they had a split 7” with the Dutch hardcore legends Seein Red on Autoreverse and Way Back When Records, as well as another split 7” in the works with Loose Nukes on Mutant Sound Records and a split 12” with Fright on Gloom records. Needless to say, the band is relentless in both musical approach and work ethic.