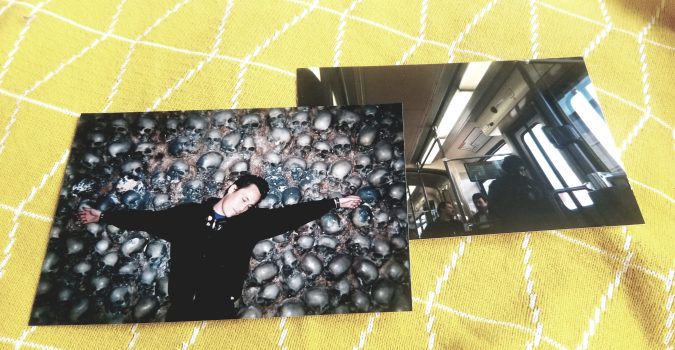 Agnes once told me that in high school her acne got so bad it felt as if she were wearing a red, pebbled mask. She kept her hair in her face as much as she could. Wore a sweatshirt with the hood up. A hat pulled low. But nothing helped. Her classmates saw, and when they saw they fell on her like wild dogs.

Chickens will peck another chicken to death if they see blood from an injury. They will pile on their roostmate they were hatched with and peck and peck and peck until their victim stops moving. Then they will leave the body in the dust.

Frankie once told me that a couple years ago while walking through the airport, a whole family of people began to point and laugh at her as she passed by them. “People are fucking shit,” I told her, but that doesn’t explain it well enough. We are oil and we are water. When oil and water are in the same frying pan they pop and spit and fight to tear away from each other. The hot oil expels the water until the water is gone and when it is gone the oil lies still. Being human is like living in hot, burning oil but sometimes it’s like the best meal you’ve ever had cooked by the one you love most.

It’s a windy day here on the farm. It blew like hell all night and rattled the window panes and pushed the locked back door open and slammed it against the wall. We have no hot water because the pilot light won’t stay on due to the wind blowing into the pipe that connects to the water heater. These are explanations in tangible terms of how hard it is blowing. It’s that famous prairie wind that eats away at you, that wears you thin. The wind is carrying springtime with it, but it tears so much down in the process. It’s reshaping the world for the new world to come.

I am writing this sitting at a square, glass-topped table in the small library adjoining the front room, the wind sighing and whistling around the outside of the farmhouse looking for a way in–a crack, a fissure, a gap in the siding. Winter is nearly over. Just a few more days. But god the fucking wind is blowing. If there is anything I want to tell you right now it is that I hope life is being gentle with you. I hope you have it soft and that it’s not shaking you. Shaking you. Shaking you.