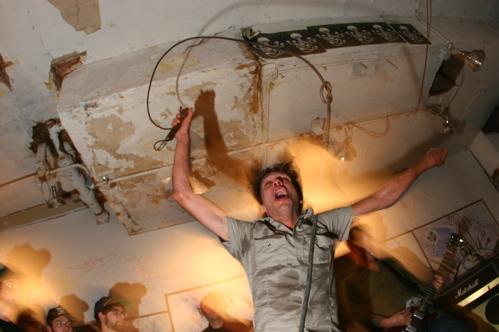 The year was 1999. The place was some hooker hick town in Holland. Who’d guess almost six years later a band first called ZOO CREW would emerge as the seldom
talented, unappreciative Godfathers of Hardcore- Das Oath?

“Jeroen Riffnabber Vrijhoef was the creator of the name”, says Cuban-born vocalist, Mark McCoy. “He liked the definition of OATH after I told him to look it up in the dictionary. He was like in TOTAL doubt of the absolute truth, he really had the desire to question authority, you know, like, and he wanted more than a band. He wanted a franchise”. DAS OATH quickly etched their names in the crumbling sidewalk of hardcore history with their lackluster self titled debut EP, a six minute long wheeze of stolen riffs and jumbled lyrical insensibility. That EP helped establish DAS OATH as the most reluctant band to ever kick off a thrash revival.

“Basically, we didn’t even have to try very hard and everyone was copying us. The big difference was, they sucked, and we didn’t. Everybody else who latched on this Thrash shtick were just posers, man”, declares ace drummer Marcel Wiebenga. “I mean what moron can’t throw together a few notes and call it a song? This crap practically writes itself! I’m angry! I’m young! I wanna die! Aaaagh! Kid’s stuff, know what I mean?”

DAS OATH has long outlived their moderately-memorable contemporaries like TEAR IT UP, DOWN IN FLAMES, and SHARK ATTACK because they are convinced of that pot of gold waiting at the end of the rainbow. Hence, the fight’s not over. “Social politics sell records”, Mark says. “The day-to-day reality of waking up, reading the paper and walking around the old neighborhood and forcing you to think of more things to complain about isn’t getting any easier. But here’s a huge market for this shit, for some reason. Who knew? These idiot kids really want hear us tackle the real shit that’s going down; so that’s my job: Gentrification’s running rampant, got it. Working wages aren’t, done. Backs are still being stabbed, you bet. Before you know it, Voila! You got yourselves a hit.”

The world is still one fucked-up place. DAS OATH’s strength through pain is an infection that still has no cure. The years in between the band’s formation have been anything but hopping and skipping through candy land, but more akin to growing up on the streets and watching your friends become more popular than you one after another. Jail terms have been served. Divorces have been filed. Close friends have died.
Some have been murdered. Even Mark’s tail bone was broken. You may ask what then drives the DAS OATH legacy? “Royalty checks”, claims Jeroen. “That’s all the motivation I need”. True or not, it’s the rhythms of machine guns and garbage trucks that make your fists shake and kill your parents. Never are the songs deeper than their musical rage. Found inside is a darkened immaturity – a distilled, poorly tuned aggression that’s spun on the long-running Vrijhoef/McCoy axis. The result isn’t pretty. It’s still undeniably “Trans Atlantic Thrash Terror” for several reasons. One, Mark always preaches and whines. He calls it how he sees it. “There is a certain
‘person’ on a message board talking some shit about me,” Mark says. “And this person is a fucking dead man. Next time, think before you strike, bitch.” Secondly, Mark isn’t grounded. He’s a rock star with hang-ups and an over-inflated head that prevents him from walking through doorways. (The last time I met Mark, he was signing autographs on underage girls’ buttocks who were standing in line at the Unity Tour 3 show.) “We’re the last intellectual thrash rock band alive,” Mark self-effaces. “It’s not in our hearts, but afterwards in our hotel rooms. We like to pretend to suffer and act like we like the abuse, it really gets us someplace. It’s like pretending a bad drug addiction you can’t shake off or like a bad marriage and only sticking around for the kids. Honestly, we don’t live it, but it looks good to act like we do. It’s our lives and it’s all we know. Trust me, I went to Grad School!”

DAS OATH as a band still works like a musical razor blade. Regardless of their history, the proof is simple: DAS OATH’s songs are quickly assembled, amateurish composed hokum that still manages to kick the ass of every other sorry fast band today.

No one is born with tattoos, but you can be born hardcore. DAS OATH was. With the ink, the music sets in, and next thing you know you’re an annoying face in line at the merch table – exactly what DAS OATH needs. DAS OATH may be behave like they live in the stone age, but it’s all a clever act to ensure “Hardcore 4 Life” stays an empty slogan that can conveniently be purchased here on a T shirt from this very site for only $18.99. 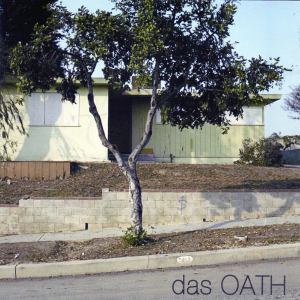