The first thing you’ll notice about Deaf Club’s Contemporary Sickness 7″ is the beautiful, messed-up, horrific design job (a team-up by artists Jesse Draxler and Bran Black Moon). You’ll see the bloodsplatter and logo printed across the plastic slipcase in a sharp blast of red–or yellow, blue, green, because there are (what feels like) endless variants of this one. Then the vinyl itself, a picture disc with a smeared black, white, and grey facial profile on one side (you can actually feel and see the texture of the paint; hold it up to the light). On the playing side, a spiraling circle of lyrics and more splatter. (For a label often immediately recognizable by its innovative design, this might be its greatest piece of visual art yet.)

Put this record on your turntable and the wall of thrash begins. Lyrics address the current nightmare of life on this planet. “Religious virus got demonic.” “Eat pills and live in the landfills.” “Optimism in the morning, pessimism at night.” “Dumb one take aim.” “Blue blood spills. Soaked up by dollar bills.”

Released a year ago today, deep in the shit-pit of Trump-era blues, Contemporary Sickness is a document of a planet in peril. The album’s title itself references the mysterious global activist movement ConSic. There is no place for apolitical irrelevance, laurel-resting, or passivity here. These are protest songs, a razor-sharp spike in the eye of complacency, a vital and timely disruption. Contemporary Sickness is the sound of a white supremacist’s hopes crushed, of a Nazi kicked straight in the grill.

For a 7″ you’re given a lot of music–five tracks of punishing riffs, red-hot speed squall, changes that feel closer to prog than hardcore, sandblasting blastbeats, protest shout vocals, and shrieks and pulse-waves of dissonant noise. Justin Pearson (The Locust, Dead Cross, Planet B, Satanic Planet), Brian Amalfitano (ACxDC), Scott Osment (Weak Flesh), and Jason Klein (Run With The Hunted) bring a lot to the table–so much so that at multiple times over the span of this EP, the table’s legs splinter, burst outward like a smashed spider, and all the food and drinks fall to the floor with a mighty crash. The result is thrilling. Some of the album’s best moments.

There’s so much compressed into these 7 inches of vinyl, you feel as if you’ve listened to an entire LP by record’s end. It’s a transportative experience. Time stops as you’re sucked into the stormy, caterwauling, tumultuous universe of this album. But once it’s over maybe you will be motivated to action. Maybe you’ll get out of your chair or off your couch and go do something. And that’s the point of life, right? To do something? On the easy days that something could be as simple as getting out of bed or making yourself a sandwich or sitting and watching the rain fall from the window of your kitchen. But during these dark days, the action required is of stronger stuff. What Deaf Club’s debut says is this: “The Earth is sick and it’s time to do something about it.” Don’t let this moment pass you by. You will regret it one day. – Adam Gnade (10/4/20) 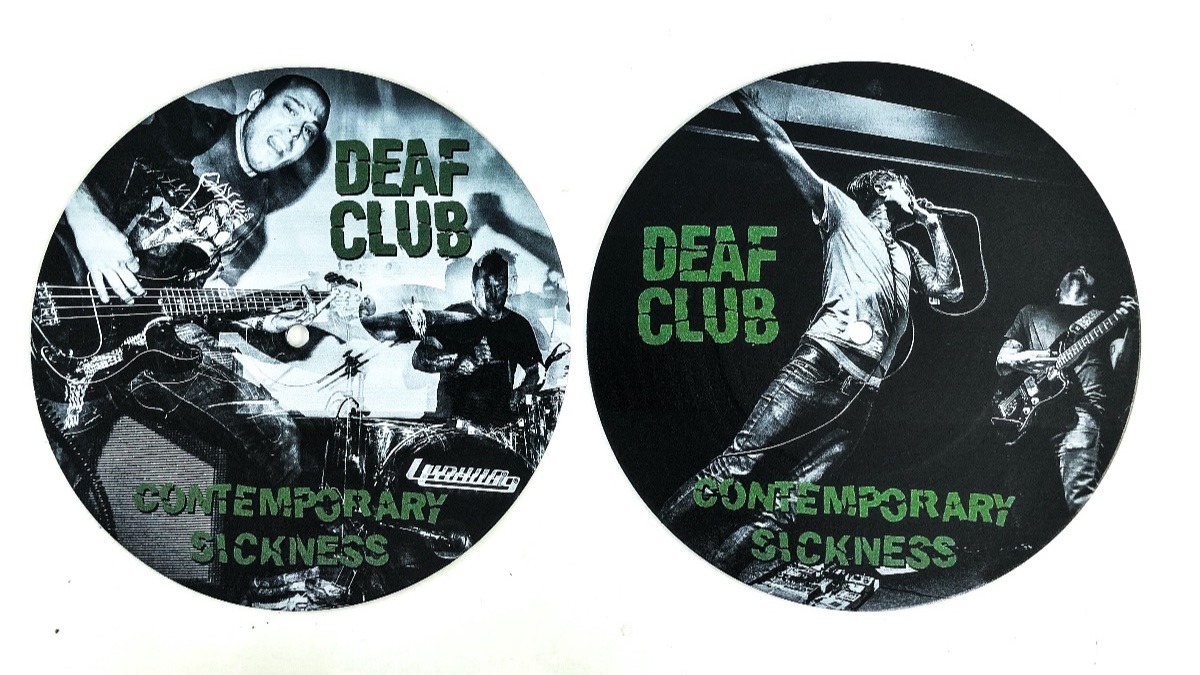