It’s like how once you see enough human beings, you start to recognize facial types and you realize there are only a limited amount of ways people’s faces “look.” You’ll see your cousin in the photo of a long-dead Civil War soldier; the face of your mom on a passing stranger a continent away. You know that July 4th party photo from 1921 with Jack Nicholson in it? Great actor. Not immortal. Not a vampire. I wish. But let’s be real here. We all kinda look the same.

I’ve seen myself twice. Once in the face of a guy at the beach in North County. It was me. Me sitting there on a towel drinking a Coke, right down to the same cheekbones and big forehead. Also saw myself in a guy from an African country I’ve long since forgotten; this one off a home video brought back to the States by family.

There’s Fiction Theory. You heard of this? How if there truly are infinite universes anything that exists in fiction exists somewhere across the multiverse because matter can only come together to create form in so many different ways. Long as it obeys the laws of known physics, it exists. So, like, Batman, all the Aurelianos from 100 Years of Solitude, Mabel Longhetti, those dumb idiots from the Fast and the Furious movies, Ernest who saves everything, Jean Valjean, etc, etc, basically anyone you can dream up exists. (I don’t know if I believe that, but it’s something to think about.)

All this to say, when I type the words “Orthrelm sounds like nothing else” I mean it. Maybe you’ve heard a band that sounds like them. In that case, I’m willing to bet they sound like Orthrelm because they want to, because they’re trying to, not because two bands rose up from the murk sounding like this without having any direct influence upon the other.

Orthrelm’s record that came out on Three One G 17 years ago today is its own animal. 2nd 18/04 Norildivoth Crallos-Lomrixth Urthiln is like if you took a band and chopped it up into tiny pieces with a chef’s knife then glued it back together without any sense of design or a bit of aesthetic intention. Which sounds terrible, but it works. It’s this wild, galloping, shuddering, formless-yet-precise speed-shred thing that is impossible to explain in words. You can say, “Ohhh, like, um, it’s Mick Barr and Josh Blair playing guitar and drums really-super-fast and jerky kinda like metal-prog-thrash-classical,” but what does that tell you? Nothing.

You need to hear this record to understand its originality. Get the vinyl (or get the CD if you’re into that). Throw it on, turn it up, shut your eyes, and let it fill your head. Listen actively. Don’t sweep your floor. Don’t make dinner. Don’t write a shopping list. Just listen. Do that and you’ll see what I mean.

–Adam Gnade, author of the Three One G released novels Locust House, This is the End of Something But It’s Not the End of You, Float Me Away, Floodwaters, and the upcoming “food book.” 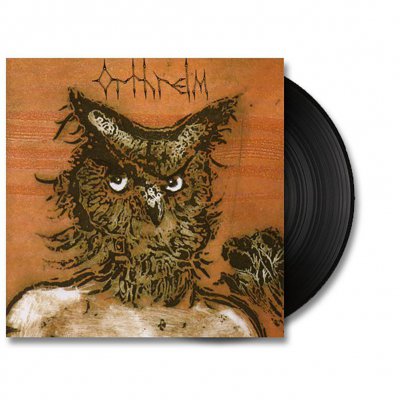