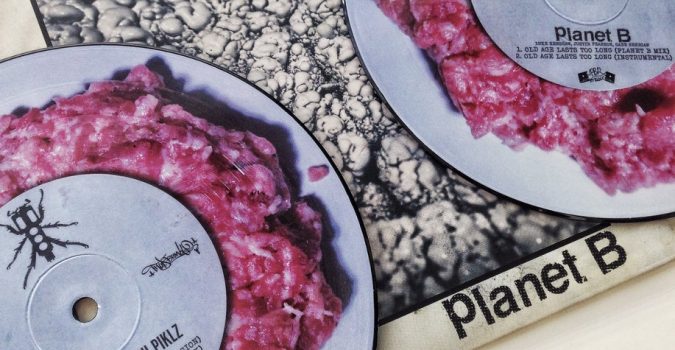 Put DJ crew Invisibl Skratch Piklz and Planet B on one record and you are given music that is like two comets crashing together, but instead of a terrible explosion, they become one giant comet and light up the sky like nothin’ you’ve ever seen.

Opening with a Wesley Willis sample, this four-song collection features hiphop and punk and hiphop WITH punk in a serrated, harsh nuclear assault that brings the best and weirdest aspects of both genres and creates surreal, beautiful soundscapes with them.

Side A is two versions of the ISP track “Polka Fist Pump.” The second of the two is a Planet B remix featuring Justin Pearson’s vocals pairing with (and against) the samples. It’s something like a jackhammer fighting a nailgun in the best possible way.

Side B is Planet B covering “Old Age Lasts Too Long,” a Justin Pearson/Gabe Serbian track from the soundtrack to Incompresa (the second of which is an instrumental version of the song). Both versions are catchy, heavy, dark–complete fucking comet crasher anthems. Recommended if you like: explosions, supernovas, flamethrowers, and danceparties.

–Adam Gnade, author of Locust House, the DIY Guide to Fighting the Big Motherfuckin’ Sad, and Float Me Away, Floodwaters.