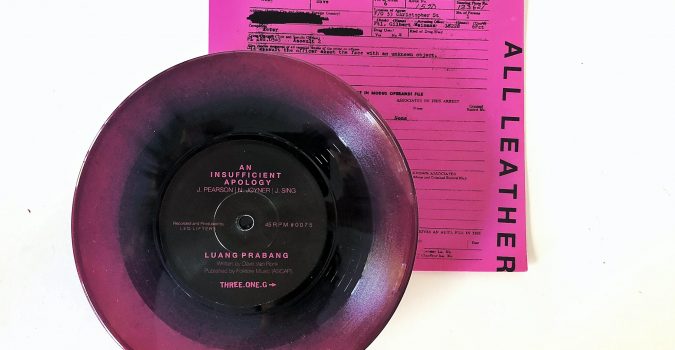 But maybe in a perfect world we wouldn’t need music like this; maybe those perfect people wouldn’t allow All Leather into the gates of the kingdom.

So, fuck the perfect world.

All Leather is music for the modern world, our world, the true and flawed world, the only world we have access to.

Released seven years ago today via Three One G, All Leather’s An Insufficient Apology 7” sounds right for the times—heavy, barbed, doomy. Something you can dance to, something most people would NOT dance to. Track one is electronic dance music as heard through the meat grinder of Three One G, if you will. It’s dark, bass-heavy, harsh, shrieking, and as full of life as a school of sharks destroying a boat. In this track, All Leather’s Jung Sing (Silent, drums), Nathan Joyner (Hot Nerds, guitars), and Justin Pearson (Deaf Club, the Locust, vocals) are here to cause you pain. Maybe you’ll like it. Maybe you’ll lock yourself in a panic room and live off canned food for a year. Your choice.

Track two is a warped cover of Dave Van Ronk’s protest song “Luang Prabang,” which is named for the city in Laos, and serves as a fuck you to the governmental annihilation machine behind the Vietnam War. If there’s anything this era needs it’s more dancing and more protest songs. The perfect world will never come. You might not like it anyway. Be alive now and turn this shit up.