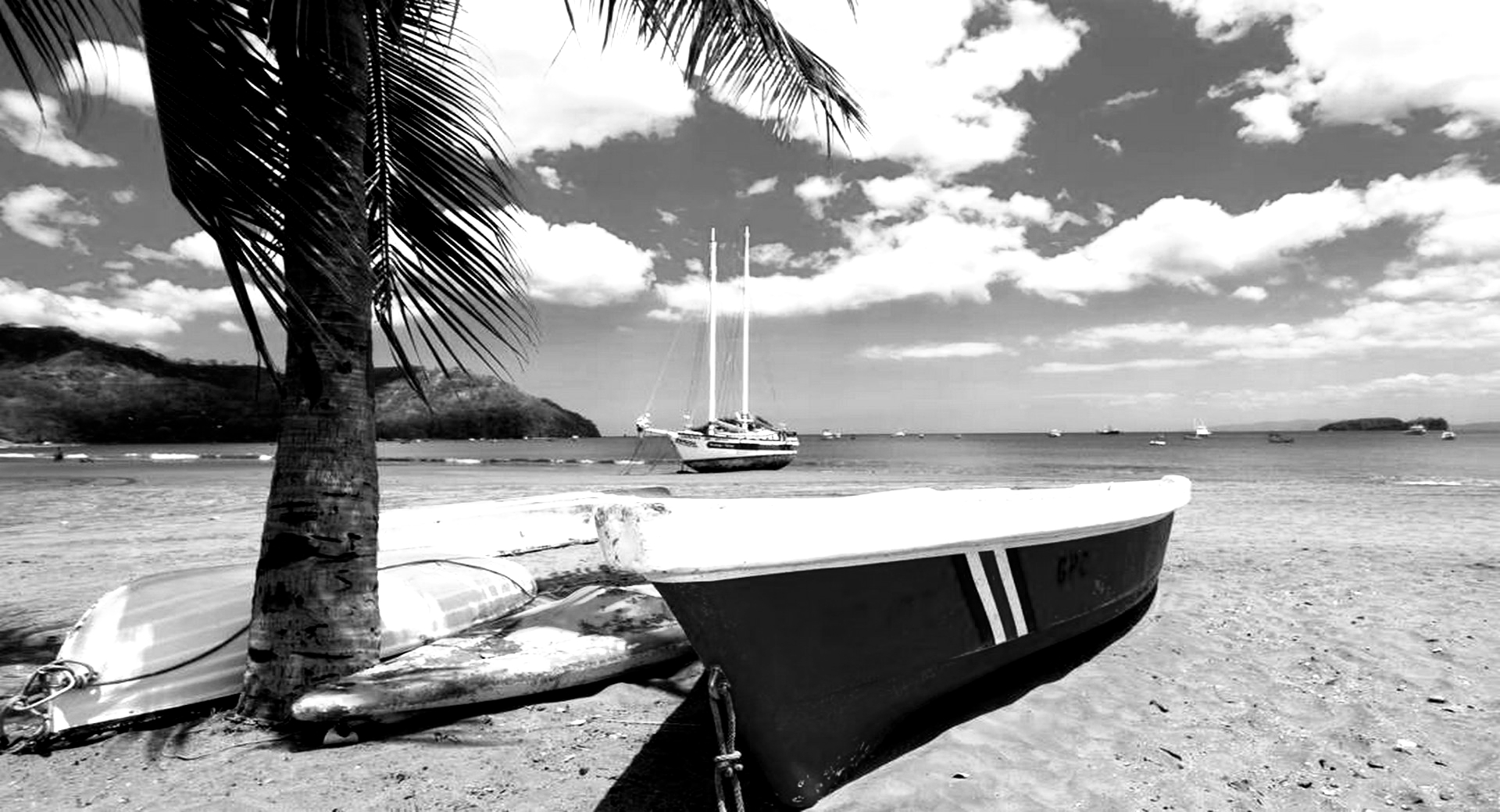 In the months following the Second World War, high-ranking Nazi war criminals were ferreted off to South America by way of “rat lines,” elaborate escape systems, often funded (and encouraged) by the Catholic Church. Adolf Eichmann to Argentina. Mengele to Brazil. I have researched this and have found no record of a post-war Nazi presence in Costa Rica, but something I saw as a teenager serves to challenge the idea. I write this distanced by years and with the misty, unreliable recall of teenage memory. What I remember is the German town, Playa Parada, the yellow boats, and the birdman in his shack restaurant.

To get to Playa Parada, a small fishing village on Costa Rica’s Pacific coast, you take a long, twisting car ride through the jungle via dirt road terribly scarred by potholes, bumps, and sections washed out by the monsoons of the rainy season.

After an hour of sweaty, uncomfortable driving, we park our rental by the small marina, and I get changed into swim trunks.

We’d heard the town had good fishing and that it was a German town, settled after the war, but beyond that we have arrived with no sense of what to expect.

Before us sprawls a piece of crescent-shaped coastline; behind us a small village nestled back against the wall of jungle, the trees ending where the dark, gold-flecked sand begins.

My parents sit on the hood of the car while I wade through the warm shallows then swim out into the bay, the water clear enough to see the grains of the sand and the tiny schools of silver-green fish that flit below me as one darting mass.

The farther out I swim the darker the water is.

Soon I cannot see the bottom.

Once my arms begin to ache, I swim on my back, the vast sky arcing above, a gray-black cluster of stormclouds massing over the jungle and headed toward town.

Up ahead of me floats a trio of long, low-slung, yellow-painted, wooden boats anchored together, and when I reach them I stop swimming and grab hold of the anchor chain of the first boat.

Shutting my eyes, arms wrapped around the chain, I try to catch my breath. The malaria pills we took on the plane sent me to bed for the better part of two weeks before today and hanging on to the boat I realize I have overestimated my 15 year old stamina. My arms and calves ache, my lungs strain for air, my heart beats wildly like I am afraid.

When my heart begins to slow, I release my grip on the anchor chain and let myself drift away from it, half floating on my back, half treading water which is darker now with the storm approaching—green verging on black, glossy, the green of dark bottle glass.

I shut my eyes again and I listen—a low, thudding drumroll of thunder brooding in the distance. The water lapping against the sides of the boats, and the boats’ hulls knocking together, though knocking lazily, a sleepy sound.

I could sleep and let myself sink into the dark water.

Slip below the surface, drift down through the black depths.

When I open my eyes again, I see a large swastika on the side of the boat painted in bright red with a string of German words below it.

Floating on my back, I stare at it for a while, then turn over onto my belly, and kick my feet.

As I swim, and as the rain begins to speckle the water, I think, What if a shark is following me? Maybe it’s right behind me, moving silent through the water, and when I think this my heart begins to race again.

Sometimes (often) I want to die, but when faced by death, even the slightest chance or possibility, I move quickly in the opposite direction.

The beauty of slipping through the depths as I drop into sleep is wiped clean by the thought of jagged white teeth tearing into the flesh of my thigh, blood clouding the water as I’m pulled below the surface, and the shark bites down again and again, shaking me in its jaws.

I get to the shore just as the storm hits properly and my parents (who have walked down the beach to the river-mouth) run for the car while I walk toward it, out of breath from the swim, chest heaving, rain coming straight on in sheets with a crazed tapping roar on the jungle leaves and on the hulls of the overturned boats pulled up onto the sand.

In the warm, musty backseat of the rental, I dress again as the rain drums on the car top.

I rub a rough towel on my head and across my face as I think of what I’d just seen on the side of the boat.

I don’t tell my parents then or later.

I make this decision immediately and I make it without thinking much about it or about why I am making it.

Once my parents are back in the car, and after I’m changed into corduroy pants and a collared short-sleeve shirt with dark red and blue stripes, we drive down the single street of the town past a general store with a German name and a German café-bakery and German butchers, all shuttered for the evening. There are no cars parked on the street, and there are no people or animals, no signs of life, not even a cat stepping through the weeds or a bicycle leaned against a fence.

The businesses are closed, but perhaps they have always been closed. The town has the feeling of a movie set. A still, quiet, artificial unreality. This is a German town. We know that. But where are the Germans? If this is a film set and they are actors, maybe this town has had its wrap party and the actors and director and crew have all flown back home. Maybe they’re drunk on the plane. A private plane. One with not many seats and a lot of room to move. Tables too. Tables for drinks and ashtrays and typewriters. Maybe the director is talking to the screenwriter about money, contracts, and dubious sexual conquests as they sit in their seats wearing lovely Italian sunglasses, the cabin of the plane sunny from the many windows.

Does that make the swastika on the side of the boat less real?

Is the swastika itself worse or is the person who painted it?

If they meant it as a joke, does the symbol outweigh the act?

Does it take meaning from its very existence, even if the act was done without thought?

Where has that person gone and who are they?

The road through town is made of smooth, hardpacked earth—a muddy dark red against the drab, weathered storefronts and the gray sky and the wall of darkening jungle all around.

There is one restaurant in town, more a shack than a restaurant.

We park on the side of the road in front of the restaurant and (because the rain hasn’t let up) we run from the car to the front door.

The shack restaurant has three tables covered in matching blue and white striped vinyl tablecloths, and on each table a lit candle and a laminated menu with a line-drawing of a stern, glaring eagle, and below the eagle two words: Fish Plate.

“I guess we’re getting the fish plate,” says my mother.

“Why even have a menu?” grumbles my father.

My father is often nostalgic for his restaurant lost to bankruptcy, and every few years entertains ideas of opening another (about which my mother is stridently unencouraging).

The waiter, who we learn is also the owner and the cook, is a small, ancient German man with a bent, stooping posture and a great round, beaked head with wisps of cottony white hair combed over it, a head like the head of a hawk or a vulture, a head that doesn’t match the small, feeble body.

The man asks us in heavily-accented English, “Vere did ju came from?” His voice has a croak in it like the caw of a raven.

I imagine him to be a bird who stopped wanting to be a bird and one day decided to quit flying and live as a man.

My mother tells the birdman we came from San Diego. He seems pleased by this and turns and walks back to the kitchen without saying anything else.

We hear the sound of activity from the next room and soon the second movement of Beethoven’s “Piano Sonata No. 27 in E Minor” (according to my mother) begins to play quietly, quiet enough that the man can be heard humming tunelessly along with the gentle, somber lines of music.

When the record ends (we are close enough to the kitchen to hear it spinning an endless, clicking, muffled loop) the man brings our plates. One by one. My mother’s. My father’s. Mine.

On each plate is a single silver-skinned fish with clouded black eyes staring up at us. The fish is whole—skin, tail, fins, nothing but faint grill marks and a clean black knife-slit along the belly.

The way the fish are positioned, all three of the pointed faces are fixed in my direction. Three open mouths shocked and gaping in death with their rows of tiny, sharp teeth. Six dead eyes staring into mine.

I don’t eat. I can’t. When my parents finish theirs, I pass my plate to my father and he picks up his knife and fork and cuts into its side, the silver skin resisting the blade like a thin coat of rubber then giving way to reveal bright, shiny, white flesh.

I get up, walk unsteadily to the exit, push the door open, drop to my knees, and vomit prolifically onto the concrete steps.

When I look up again, I see the rain has stopped.

The road down the center of the village is dark now except for the hazy yellow streetlights which give the town the feeling of a compound.

An orange, scarred moon hangs over the bay.

The birdman has put the record back on and though he’d played it quietly before, now Beethoven’s sonata blasts out from the dark interior of the restaurant, hideous, gleeful, deafening, shaking the floorboards I’m kneeling on.