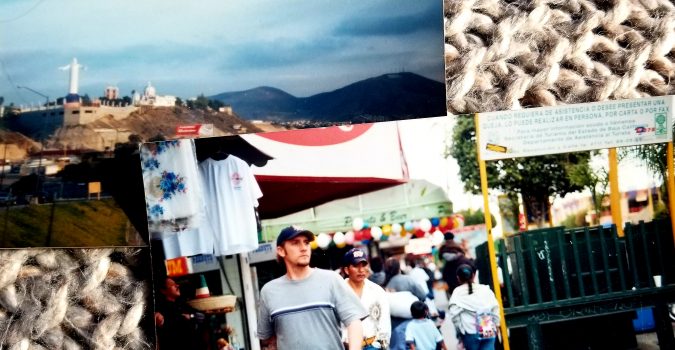 Avenida Revolución, Tijuana, Mexico, August 4th, 2001. Walking past the leather coat shops, the colorful blankets and boxing marionettes for sale, display cases of knives, rows of women’s shoes, tourist t-shirts, Ropa Americana, telenovela magazines on the walls of a blue-painted plywood newsstand, lottery tickets strung up with brown twine, a marble chess set of Aztec statues that double as weed pipes gleaming in the sun, the bouncer smoking outside Peanuts and Beer, dropping his cigarette, smashing it flat with the heel of his cowboy boot.

Walking toward the US side, Gabby Martinez tells Agnes McCanty, “This one time when we still lived in TJ, my dad got a job as a magician. It was this sketchy-ass company in the Coahuila that would train you to do card tricks and slight-of-hand and shit like that. Looking back, I’m sure it was a front for something, who knows, but you went to their magic school for three days then you were ready to do parties, though he had to buy his own suit and cape and top hat. After that they got him jobs. He called himself El Señor Extraño. Mister Strange.”

Gabby and Agnes take a left on Calle Primera, passing a white tourist family posing for a photo with a donkey painted to look like a zebra. The grandmother of the family–scowling, trying on a straw vaquero sombrero with “Boracho y Loco” printed in gold script across the hat-hand. “This goan make me look silly? Doan lie,” she says in a thick, raspy Southern drawl. “Naw, momma,” says her adult daughter. “You goan look cool. You alright.”

Gabby continues, “Soooo, Papá aka El Señor Extraño got three jobs total. A birthday party in Rosarito for this rich family where there were fifteen pizzas set up on a great big enormous long table with every topping you could ever imagine but only three kids at the party and the birthday girl off crying in a back room all afternoon. When he left, they gave him six pizzas still in the box, a plastic Supermercados Gigante bag full of pork tamales, and tipped him so heavily he came home and was like, Gabriela, mija, I’ve found my calling, I’m doin’ this forever. The second job was some corporate party for a fancy-ass toy company in Zona Río. They were super rude to him when he showed up and nobody watched the show. He was like, Gabriela, how could people who make toys be so cruel? My dad’s an innocent. It ripped his heart up. The third job, his last, was at a mansion up in the hills. A buncha weird-ass rich men who assembled a shitty budget circus for their creepy fucking orgy. There was this lady with a yellow python and she danced in a corner by the bar holding the snake and, like, wrapping it around her body and shit like that or whatever and a fucking clown in another corner blowing up balloon animals nobody wanted and then my poor dad doing card tricks while all these rich motherfuckers sniffed cocaine and smoked fucking crack right there out in the open and guys were getting head on the big white leather couches and people went off to the back rooms to fuck each other. A lot of this he told me when I was older. I think he said Sam Kinison was there.”

“That comedian who screamed like an idiot all the time.”

“You don’t remember him? Anyway, my poor dad. He quit ten minutes into his set and came home all disillusioned. After we moved to the States, he found his costume in a box while we were unpacking and he just held his fucking magic costume in his arms and cried like a little boy. It was at this point where I was like, That’s it, I will do anything for my dad, I’ll do whatever to keep him safe and happy because the world is absolutely shit. It’s shit, Agnes.”

–Adam Gnade, author of the novella Locust House and the novels This is the End of Something But It’s Not the End of You and Float Me Away, Floodwaters