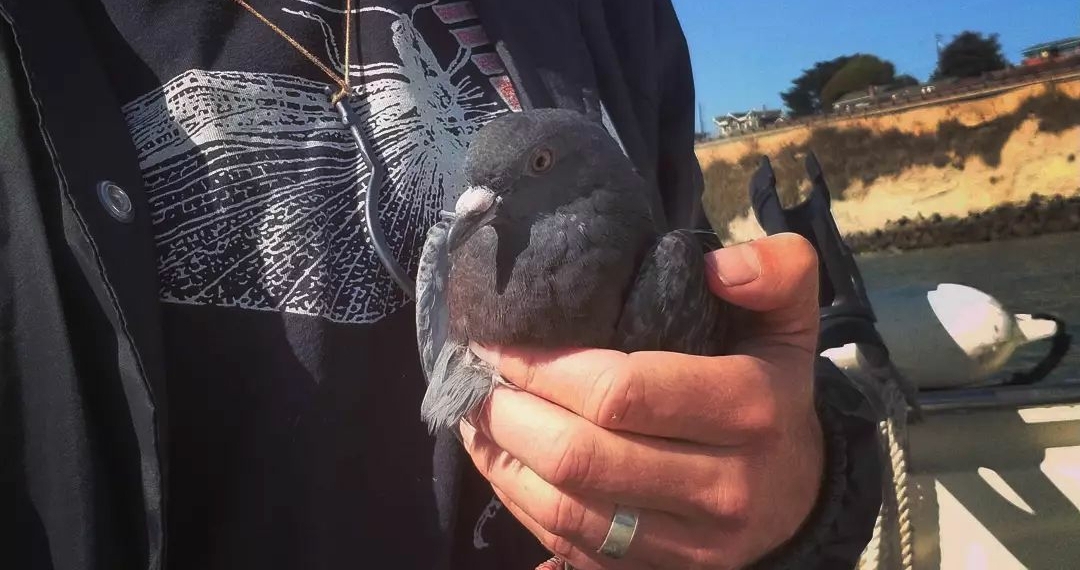 My first day back in California we save a dying bird, and it feels like a good omen—a proper start to a long-awaited homecoming. That day (today, earlier today; it’s nearly dusk now) begins at the Santa Cruz harbor. My father and my uncle Lenn and I take Lenn’s boat out to sea in the morning. It’s a warm, clear, windless day—the water like a smooth sheet of emerald under the sun.

At moderate speed, we hug the coast and motor south. I listen to the low murmur of the engine and smell the salt and brine. I tell myself this will be a day without trouble or grit or worry—the sky endless and blue all around and above us. The sun out but unobtrusive. The kind of sun that never hurts you. California sun.

At the Capitola pier we anchor 50 yards offshore and close enough to the pier to float in the shade it casts. Later, a memorial will be held for my mom’s brother who passed away just before the pandemic hit and didn’t get a service. A group of his friends and family will paddle their surfboards out to sit in a circle and join hands and say goodbye. This will be followed by the tossing of his ashes by my uncle’s wife and kids, my younger cousins.

Sitting in the boat as we drift lazy at anchor, I happen to glance up at the bottom of the pier some 20 feet above the water and see something small and dark thrashing wildly like a crazed bat.

I move to the bow of the boat to get a better look. It’s a pigeon caught in fishing line, hung from its wing just below the footboards of the pier where people fish off the side and sit on benches eating ice cream cones or popcorn in paper bags. It (the bird, the pigeon) flaps and jerks then goes limp. After a moment, it jumps to life again, beating its own body against the pier. This cycle repeats again and again.

My uncle, a hunter, says something along the lines of him being able to shoot them but watching them suffer is another thing.

My father, who used to hunt and doesn’t anymore, and who is soft-hearted like me, says something about it being a poor thing and how it’s a shame, and I agree and try to look away.

Look toward the beach at the crowd beginning to gather for the memorial. Look at the ridgeline of the butterscotch yellow cliff, the traffic passing slow or stopped. The smooth green water and the brown kelp floating just below the surface. Look away, force yourself to think of something else.

The problem is I can’t.

Try as we might, and we do, we can’t help looking at the bird.

I try to put it out of my head.

But there’s no doing.

The bird is there. There—unable to free itself just as much as I’m unable to look away.

The goddamn bird, dying horribly, wrenching its body left and right with the last of its strength.

“Pull the anchor,” my uncle says quietly, and I do so without asking why because I know by his tone we are going to do something about this.

I belly over the bow of the boat and pull in the coils of wet rope, then the chain, and finally lift the anchor dripping back onto the boat.

Behind the wheel of the boat, my uncle has strapped a rusty, notched filet knife to the end of a 6-foot bait pole. He wraps the velcro tighter then tests the edge of the knife with a finger.

“Good,” I hear him say without him saying it. I hear it because I’m thinking it too: “Good.”

My dad cranks the engine to life and we motor under the pier, the shade cool on my face, and the sound of the water knocking rhythmic against the pilings.

I climb up onto the bow of the boat with the bait pole and the knife secured to its end, and when we get close, I hold the pole high above my head and hack toward the line that holds the bird.

Too high for my reach.

I’m not even close.

Without speaking, we back the boat out again, and I switch places with my much taller uncle, who stands on the very edge of the bow, holding the pole in front of him like a samurai sword.

He tips to the side, and I grab hold of his belt to keep him from falling over.

A crowd has gathered to watch from the pier. A woman with long red hair looks straight down at us while eating popcorn from a yellow and white striped bag. I hear someone say, “They spearin’ a fish?” Another someone says something in Spanish and I hear someone else say, “What do they think they’re doing?”

Back under the pier we go, and my uncle begins to slash in the direction of the line, missing by just an inch.

We repeat the process again.

This time my uncle swings true and the fishing line snaps and the bird drops into the water as if dead.

I grab the net, and as we pull closer in, I lean over the edge, and scoop the floating bird out of the water.

Now my dad pulls us back out from under the pier, and I sit down on an ice chest at the front of the boat, and hold the bird in my hands, slowly unwrapping the thick, clear yellow fishing line that has looped itself around the base of the bird’s wing, cutting deeply into its flesh, and further in, constricting its neck.

A spot of watery blood drops in the space between my sneakers. Another flecks my wrist and runs down it as I work.

Once I’ve unwrapped the bird, I ball up the fishing line and shove it into the back pocket of my jeans then tuck the bird in my coat.

Throughout the memorial and on the ride back to the harbor I hold the bird in my coat and feel its racing heart rate slow then even out.

For a while it sleeps.

I pet its little head with my thumb. The feathers around its face are so small and soft they’re almost fur—like cat fur, light, warm, babyish.

Back at the dock, I step off onto the footboards as my uncle ties the boat to the metal cleat.

I walk up the dock with the bird in my coat then across the parking lot, past the public restrooms and the popcorn cart and the coffeeshop.

On the edge of the harbor is a yellow sand beach. People sit in chairs holding sandwiches or Big Gulps or vapes or phones. A volleyball game is on with a group of short teenage boys playing against a group of tall teenage girls. Cyclists pedal. Sunbathers sunbathe.

In the midst of this are pigeons. Pigeons eating scraps of castoff food. Pigeons pecking in the sand. Pigeons lifting off to fly wherever pigeons fly to.

I kneel in the sand and set the bird down.

It stands confidently, testing its wings out, looking up at me.

As it looks at me, and I at it, I think of how kids I knew growing up killed pigeons with BB guns, with rocks, with firecrackers; and of the countless times I’ve heard people call them rats with wings or ugly or scum or stupid or a nuisance.

Kneeling next to the bird in the sand, I tell it to be a good bird then walk back to the docks. I don’t turn around because by now I’m attached and I’m missing the bird. Maybe I love the bird. No, I do. It’s that easy. It’s like last night when I met my aunt and uncle’s new puppy and the first thing I did was tell her how much I loved her. It was instant. There was no question about how I felt.

To love easily might be a burden, but it’s also a gift. It’s a gift both for you and for the thing you love. To love easily is to let your guard down, to not see any difference between us. Human, animal, we’re all pieces of one big machine. To debase any form of sentient life is to take pride in a betterness you don’t actually have.

It’s a few hours later now and I’m sitting on a log at the beach near my aunt and uncle’s home in La Selva—a small farming community that lies between Santa Cruz and Moss Landing in the Monterey Bay.

The fog has rolled in, thick and damp, and now the sun has begun to set, the sky darkening—the air full of the smells of sea and dry dirt and crop fields and ice plant. It’s a smell I have known for a long time and have always loved—a smell of home and family and adventure, of years of foggy nights here.

Sometimes when I smell that scent it’s as if time hasn’t budged an inch, as if it has no power to change, to crush, to distort, to kill. The smell of this place hasn’t changed since I can remember and that’s a comforting thought, and with that comforting thought I get up and walk to the cliffside, which I will hike up, then walk back through the crop fields to the home of my family.