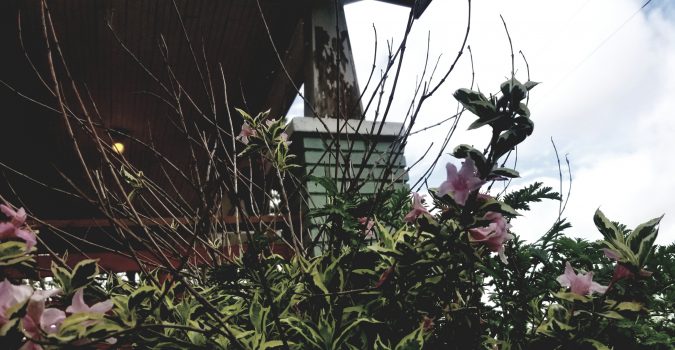 We stand around the kitchen and we talk about Palestine. How no one in this country cares. How no one is watching. And now Israel fires rockets at Lebanon? Outside it’s raining again. Raining so hard the day goes dark. The sky is green as bottle glass and the water runs down the kitchen windows, casting reflections on the walls that move in shallow veins like rivers and streams. The reflections are beautiful. Or are they refractions? I can never remember, and I’ve given up searching things just to know.

I read a poem last week about how poets are writing about flowers while people are dying. It felt like a knife to the gut, a knife stabbed over and over again then twisting, twisting you up with the blade. (Of course, you could use “poets” as a metaphor for anyone. As in no one is paying attention. No one is saying, “Look! Look at this! Don’t turn away!”) I wish I could remember who wrote it. I looked that one up. Found nothing. Found shit on poets writing about flowers. That was it. Actual poets and actual flowers. This is prose, not poetry, but I don’t want to write about flowers while Palestine burns. I want to pay attention and I want to do what I can. But what does that mean? The powerlessness is so overwhelming I want to bury myself in the earth, hide for centuries.

At night after Frankie and the boys have gone to bed, Alison and I sit up and read the news. It’s as bad as you can imagine. That’s a line I’ve thought of often. This year. Last year. The years after 2016. “As bad as you can imagine.” I understand why people close themselves up inside, why they stop looking. It’s easier to feel nothing for people who are suffering. It’s easier to pretend that the people dying are so much unlike you they are not even human. Maybe you can pretend that their pain doesn’t matter as much as yours because they relate to the world differently than you. Focus on what’s in front of you, on what makes you feel good, what makes you forget.

I’ve been thinking of this Phil Ochs song where he sings, “You reach into the night and find that nobody’s there/No, you can’t get stoned enough.” We can only hide for so long until the bombs fall on us. We can only dream for so long until we are shaken back to life and made to face the day.

It’s morning now and the sun is shining. The world outside is green and alive. Flowers blooming dark purple and a pink so pale it looks white. Flowers with bright yellow faces as wild, precious, and glorious as the sun. People are dying in Palestine. The Israelis have destroyed all the schools. I’m reading the Washington Post and I wish I hadn’t. It would be so much easier to turn away. A field of flowers. Spring grass moving like the sea. Palestine burns.