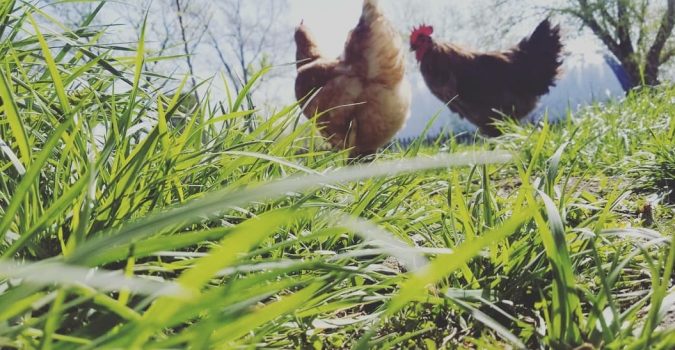 A few weeks ago, I went outside late to bring the dogs back into the farmhouse. The night was pure black. Black without city lights, which is a special kind of dark—a deep, inky, velvet blackness. I wore a headlamp, and as I walked, the light of my lamp picked up the reflection of eyes in the grass—tiny silver eyes shining up at me. Specks. Too small for mice, too low for most things that crawl. When I got close, I bent down to look and they were spiders—big furry spiders staring at me, their twin eyes shining like pin-lights. A whole family of them, all turned in my direction. (News to me that some spiders have two eyes like us, that they shine in the dark, and that they watch you.) Living here you’re in the mesh of life. As spring moves forward you are front row to a growing world.

Yesterday we found a turtle on the road and we named him Eagle. There are Devil Crawfish in the swampy land down in the lower fields. At night, fireflies. Some mornings this huge fucking cat creeps up through the tall grass—a big white bruiser of a tom with a head like a boulder. (He won’t let you near him, but he’ll jump up on the back deck to eat the food we leave out for the rest of the wild cats.) Pea frogs are called pea frogs because they’re the size of a pea. You see them skipping out of the wet grass like BBs as you walk through it in the morning. There’s a big neon green frog that looks like something from a rainforest tourism ad. That one sticks its beautiful self to the side of our green porch column and it stays that way for hours, hiding, eyes shut, barely breathing. Also, dragonflies, squirrels, cows in the far field, possums, deer on occasion (but not often), warty toads in the garden, coyote packs yipping at night, and a big tawny one the size of a hero dog that comes out after sunrise and stares at me from the edge of the woods.

Last week I watched a bald eagle eyeing the chickens from the top of one of the walnut trees down by the grain silo. Electric green hummingbirds hover at the red glass feeders outside the farmhouse windows. Woodpeckers, owls, and cardinals. Hawks everywhere. Vultures the size of prehistoric airplanes. Mice in the barn with their babies nestled in sawdust under scrap plywood. Legions of ants in lines, June bugs knocking against the windows at night, Japanese beetles, gnats, flies, earthworms, lilac butterflies, inch worms, grubs, wasps, hornets, writing spiders, and more bees than you can imagine. There are many flowers here, and on, in, and around the flowers are clusters of wonderful bees. (Bee scene report: fine here.) We rarely see snakes, but there are snakes. A black wriggling string in the grass in front of you and then it’s gone. Bats in the dusk. Bats are a treat to see. Bats eat mosquitos and that makes them a battalion of saints in my eyes.

This is not counting the animals we take care of on the farm. The best friend pair of donkeys named after two of my closest pals, the goats, the solitary sheep, the well-loved house cats. Next up, we’re adopting a flock of guinea fowl because they eat ticks, and along with mosquitos and fleas, ticks aren’t on the welcome list. The rest are—even the spiders and snakes. Welcome. Live. Do what you like.

Nature is a powerful thing to witness when you drop your overbearing human attitude and look. I’m not saying nature is an antidote for how fucked things are. Others have said that. I won’t. But nature is here, and out in the country you can’t ignore it. Same goes for the city, you just have to look harder. One of the last times I left London on tour I made a game of fox counting on the night coach from Crouch End to Finsbury Park. (Got to 22 before I gave up.) I remember the streets flooding in Pacific Beach during El Niño, and in the morning you’d find dead fish and tuna crabs drying on the blacktop. Up in the LA hills, rattlesnakes. Bats in the sky over Kansas City before a Fuck Buttons/Pixies show. Nature is around us and it’s watching. There’s no deeper message here unless you want to insert your own. Do what you want. But look. That’s all I’m saying. Slow down and pay attention. We’re pulled in so many directions. Life is hard as shit and daunting and everyone is so tired and wants to die. Yes. But look. –Adam Gnade