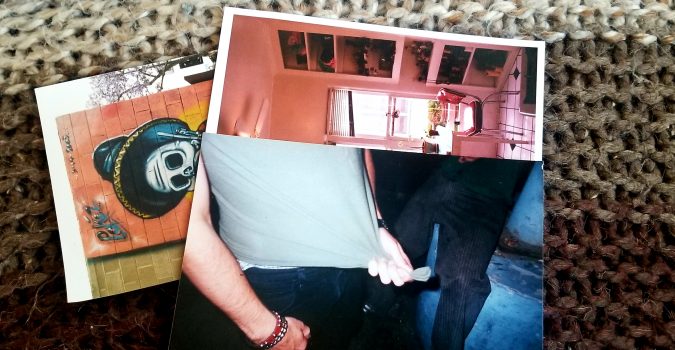 I sit on the curb reading the new issue of CityBEAT while Joey Carr smokes crystal in the back of Kurt’s van. The sun is setting over Downtown, and from the Broadway hill it’s a wide, sweeping, panoramic view of the harbor and the airport, the silver gray office buildings with the light of dusk shining off them and the streets of the Gaslamp and the new ballpark they’re building. I can hear Kurt and Joey laughing inside the van which is the color of coffee with creme in it and across the middle it has a thin orange stripe just for looks.

I fold the copy of CityBEAT into a square and stick it under my head for a pillow as I lie back in the grass, crosslegged at the ankles, my sneakers in the gutter.

The breeze that blew hard all morning quit a few hours ago and the air is light, so light you don’t feel it on your skin.

Today is the first of winter in San Diego and it’s just like any other day–warm, a vast blue sky empty of clouds and lined white with the cottony streaks of jet contrails; the smell of many good things coming from the taco shop next to 7-Eleven and the smallest scent of dryer sheets from the laundromat next to Humberto’s.

My grandfather once worked on an earth-moving crew clearing hills and woods for housing developments, parking lots, and shopping malls. Occasionally they would find the petrified bones of an ancient mammoth and work would cease until a team from the Smithsonian drove out to dig it up and take it away. They found human remains too–native burial grounds, and that meant work stopped for a while, if not for good. Mostly the work continued.

At one point his crew dug up the site of a battle. Arrowheads. A broken cavalry sword. Rusted belt buckles. Splintered ribs. Skulls bashed in with a rifle butt or shot clean through with a bullet.

The dry crab grass under my back poking through my thin black t-shirt, I think of those skulls like I often think of the stories my grandfather told.

What is below the earth here? What might I be lying on? Can you still smell the blood that was spilled? Who died where I now live?

I have been thinking of killing myself all week–the voice, the voice that is not quite my own telling me to quit.

At that moment the van door slides open and Joey climbs out, grinning, jittery, his eyes intense and bright and watering at the edges.

“Where we going now?” he asks, scratching the back of his head, raking his black-painted nails across his scalp. “You wanna go see somebody or do something or maybe we should … we could walk down to the harbor or–”

I cut him off and tell him walking down to the harbor sounds just fine, that maybe we could get something to-go at Pokez or grab a beer somewhere or catch a bus up to Mandarin Dynasty. He agrees though I know he won’t eat. When Joey’s doing a lot of meth he goes days without eating. When he’s off the stuff he’s voracious; eats out four times a day, big breakfast, a long lunch, dinner, then late-night quesadillas at La Posta or El Cotixan up in Clairemont.

We walk down the Broadway hill together over all the bones in the earth and the skulls with bullet holes shot through them and the blood leaked from countless bodies in a wild spiral of years, Joey talking a mile minute, pointing out cars that drive past, singing bits of songs, quoting ’80s movies, commenting on the quality of the light. –Adam Gnade