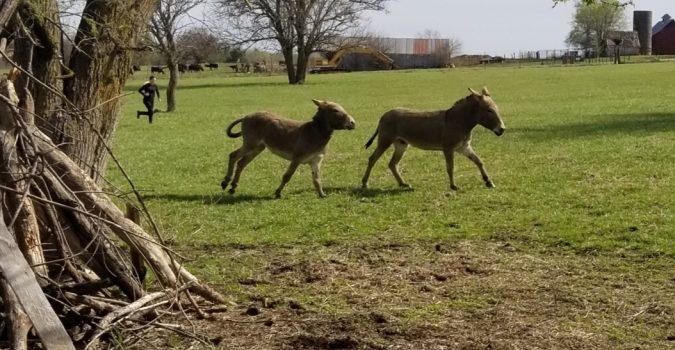 It’s a tricky line to walk.

You think about the future too often and you stop living in the present.

You don’t think about the future enough and you will be ill-equipped to deal with the smallest problems of tomorrow.

I run through disaster scenarios and I think of the worst possible thing that could happen. I think about next year and five years from now and life in 2041. I sit up late reading the news about how 60 years from now there will be nothing but summer. The seasons will merge into one hot, dry, storming, sweaty, shitty summer that will never end. The animals alive today will disappear and we will mourn the passing of species after species after species. Ugh. The plants around us will die off and we will talk about how it was when we had their beautiful flowers to see.

You think about this too often and you will ruin today.

You don’t think about it enough and it will be too late to change.

You think of this too much and it will paralyze you. Where is the balance? If I had that answer I wouldn’t be writing this.

Today is Wednesday, April 14th. It’s sunny and breezy and a little cold. My god-sons Willy and Johnsy are doing school on their tablets—Johnsy sitting across from me at my writing table in the library, drinking watered-down grape juice from a jam jar; Willy on the floor in the front room by the window, tapping his screen, squinting. Alison is sitting on the couch looking at the news on her phone, frowning, saying things to Willy every once in a while, things I don’t hear because I am wearing headphones blasting Gravity Records’ Moss Icon discography in order to focus.

Frankie’s upstairs. Soon she’ll come down and make coffee. Alison will go outside and work on the new garden or cut down the scrub-brush along the farm’s driveway. Frankie will get her boots on and climb the gray metal gate to work on socializing the pair of rescue donkeys we’ve just adopted. Willy and Johnsy will go up and down the twin plastic slides Alison set up on the back deck then push each other on the tire swing while I sit at the wooden table on the deck with headphones on writing or answering email.

When I am done, I’ll push Willy and Johnsy on the tire swing or we’ll walk in the grassy fields full of yellow dandelions while they sing Harry and the Potters songs and pretend to teleport or cast spells on the barn cats that follow us.

At 6 I’ll make dinner and serve it at 6:30 and we’ll sit around the table in the front room talking and laughing while a mixtape of Fortune Records bands plays low. Doo-wop, old rock ‘n’ roll, ’50s country that’s somewhere between the 1st Hank and Roy Acuff.

The boys will go upstairs to bed at 7:30, hugging us all goodnight and saying, “I love you!” and “See you in the morning!” and we’ll say, “I love you too!” and “Have sweet dreams!” and then I’ll clean the house and we will settle in for the night.

Frankie wants to watch a documentary on HBOMax about the honky-ass terrorist fuckheads from QAnon. Alison’s up for it, but that kind of white supremacist pedophile-obsessed nationalist 8chan shit scares the hell out of me. Still, the fact that we are doing this together and that we’re safe (for now) feels absolutely incredible. The castle wall is up. The screaming dickwads are outside. We are INSIDE. Fuck ‘em. At least for now we can ignore their importance. At least for now we can take comfort in our fellowship. (Later, we will slouch toward Mordor.)

This is what I need to think about because this is better, this is a good life, this is the life that I want to live, the life I AM living. Think about THIS.

Think about this and think about the future in the moments when you can FACE the future. Know when to try and when to STOP trying.

It’s like that Kenny Rogers song about knowing when to hold ‘em and when to fold ‘em. There’s wisdom in anything if you look.

Think about THIS and when you think about the future, make plans to do something about it, something tangible.

Remember this so you don’t go astray again.