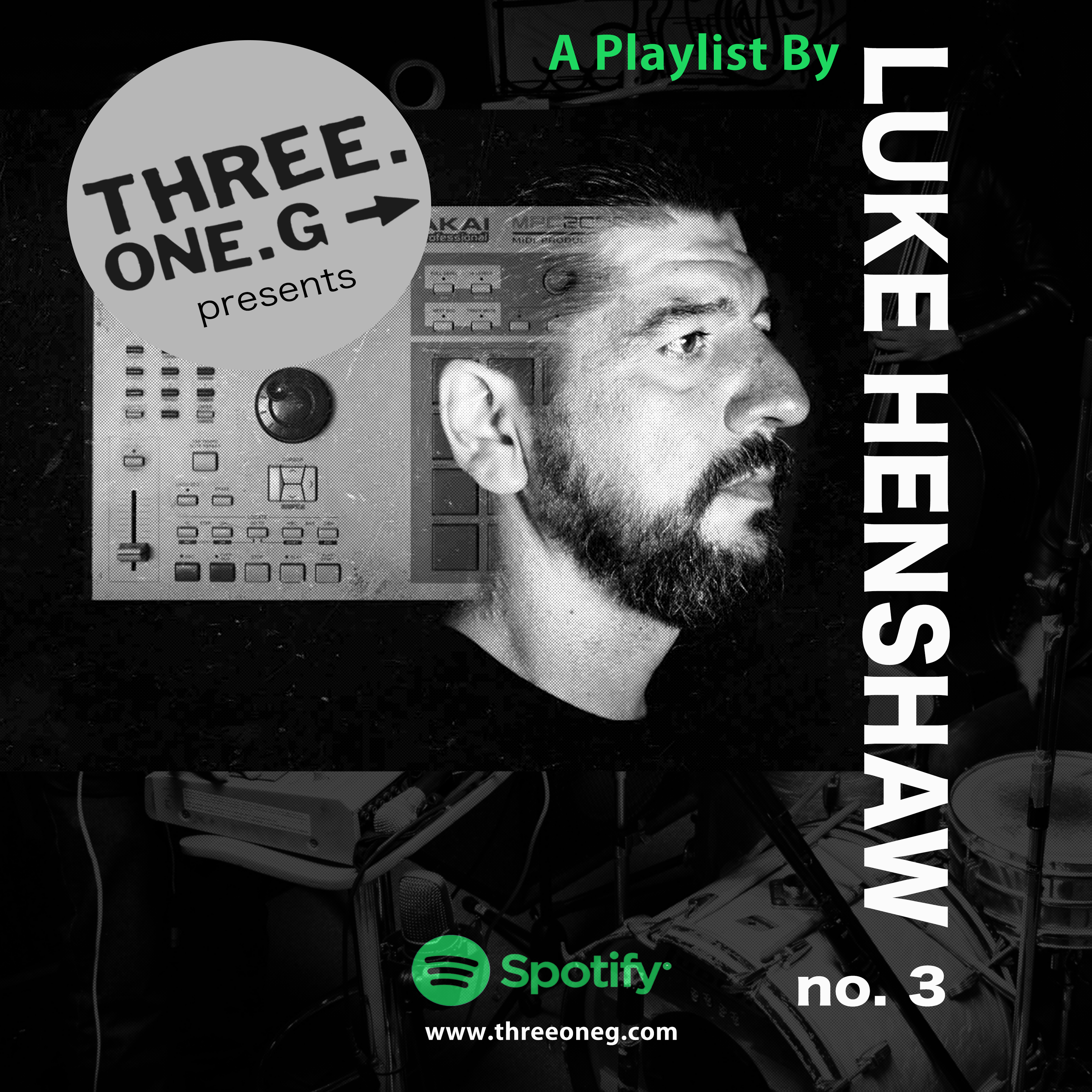 Here we have the third installment of our featured artist Spotify playlist. This is a curated selection of tracks from Luke Henshaw of Planet B, who has also worked closely with a handful of other Three One G artists, by recording some of our releases as well as being part of the Cult and Culture Podcast. Check out Luke’s selection below and read his comments on each track he chose…

1- Dive Bomb Blues. Im a big fan of movie scores, especially horror films. Horror scores aren’t what they used to be in terms of movies like Halloween & Suspira when melodies played through out to carry the picture. Nowadays it’s all about building sound scapes and Johann nails it with Mandy. He wrote a score that allowed so much space but closes you in at all the right times, as you can hear here. Sadly Johann never got to see the final cut of Mandy, he suddenly passed in the middle of the music edits.

2-Pterodactyl. It’s amazing what musicians can do when they lock them selves up for 4 days and hit the record button. Here D-Styles, Mike Boo, Excess & Pryvet Peepsho take us yet again to a whole new level using nothing but their turn tables and mixers. They are currently locked up in Thailand recording the follow up to this.

3- Oboslete. This is one of those “What the fuck!!!” albums. It leaves you speechless. This album demands attention and it gets it from start to finish. It’s hypnotic in so many ways & you’ll be lucky if you have any skin left on your face by the end of the album.

4-Profondo Rosso. Going back to the horror scores of the older days, Goblin were the masters of 70’s horror scores. In fact without them you wouldn’t have scores like Halloween and such. Don’t believe me? Listen to Suspiria then go back and listen to the Halloween theme. Or go read any interview with John Carpenter and he admit’s it. Profondo Rosso is my favorite of theirs, the melodies swarm through out with very proggy bass and drums to carry the rest.

5- Chocolate Chip Trip. Other than seeing them live a few years back and their massive radio hit’s , I’m not very familiar with a whole lot of Tools music. My son sent me the new album and I really dig it. To me if King Crimson hit the studio today, this is probably what the result would sound like. Chocolate Chip Trip is this huge percussive piece with a weird sound that plays the background, which is pretty much the backbone of a lot of music I make.

6- Jesus and the Snake. Cliff Martinez has open my eye’s to electronic music in so many ways, mainly capturing drama without using orchestral violins and cellos. He is the composer behind movies like Drive and Only God Forgives. Jesus and The Snake is actually a piece from the score of a tv series by the name of Too Old To Die Young. Now, I haven’t seen a single episode but the music is fantastic. His theremin work is awesome!!

7- Icecream to God. Kitchen and the Plastic Spoons is a band I discovered going down the YouTube rabbit hole. My original reason was searching for a certain opera, then 2 hour later I’m listening to this track. If you’ve been to any of our past Planet B Nites, then you’ve heard this song.

8-Crepe Cake Drizzle. Another one from these guy’s. This track actually reminds me of something Cliff Martinez is capable of writing, ut with only turntables. There’s a famous Crepe Cake place in Vegas & Im 100% sure this track is named based on it.

9- Fuck the Cops. I used to follow this Blog named After The Sabbath and discovered tons and tons of undiscovered 60’s & 70’s heavy stoner doom prog rock tracks from all over the world. This is just one of the many gems I’ve gotten from the blog. I choose this song because the message was as it is now, Fuck the Cops.

10- Whose Methane Gas Is On Mars. Just the name alone is awesome as is this whole album by Inus. This is another album that leaves you scratching your head in an amazed wonder. It’s like a roller coaster that makes you vomit and you insist on riding it again. Bobby’s finger tapping guitar style is so chaotic and hypnotic at the same time. Some I try to capture with Planet B but with my MPC. If you get a chance to see Inus live, do so!!

11-Hammer Without A Master. When I was much much younger I used to drop LSD and turn off all the lights, leaving myself in complete darkness. This song is very much the sounds that would play out in my head. The good old days.

12- Diary of a Madman. I’ve recently started watching the new Wu Tang Clan show & growing up in the middle of them dropping a new project every other month was the shit. Our Thursday night Freestyle turntable/rap sessions were filled with all the new jams they were putting out and of all the side projects Rza released Gravediggaz was always my favorite. This is another track you would catch me planning on our Planet B Nites. It’s like a horror film in the form of a rap song.

13- Party, Crash. Colin Stetson is another composer in the horror film genre who creates some of the most amazing sound scapes that leave you feeling unsure. I am amazed with what he does with Hereditary considering he used mostly a his clarinet.