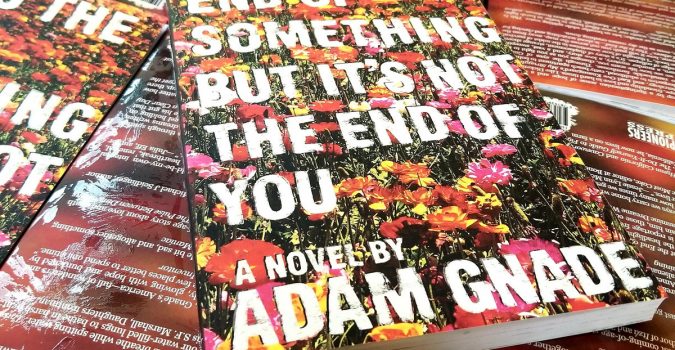 Excerpt from the book:

The last time I went to the apartment on Zanzibar Court everyone other than me dropped acid. It was Shane and Jason, Andy, his cousin Todd Barney, Todd Barney’s new girlfriend KellyLee, and Richard the Famous Bike Jumper. The paper tabs had smiling cartoon rabbits on them. It was a week before Easter—a gray, drizzly day, the windows fogged.

Richard the Famous Bike Jumper was a guy I knew from the neighborhood, but he never remembered me.

Growing up in Pacific Beach in the late-1980s, Richard the Famous Bike Jumper was unavoidable. He was in every back alley and dirt lot, on every street corner, jumping his BMX off sidewalk curbs unspectacularly. He wore cut-off belly-shirts that ended at the high midriff, tight acid-wash jeans with elastic waistbands, black and white checkerboard Vans, and a desert ball cap with yellow and black checkered racing flaps in the back. His teenage mustache was like a thin, black shadow above his lip. Tommi’s older brother Juany called it “the filthy eyebrow.”

More often than not, Richard the Famous Bike Jumper kept a bagel half-tucked into the front waistband of his jeans as he rode. We never saw him eating these bagels, but on multiple occasions he told us that it was there “in case of dire emergencies.” If asked, he would tell you he was on his way to 7-Eleven to play video games, but we never saw him there (and from 4th to 8th grade we were at the Garnet and Fanuel Street 7-Eleven every day).

Looking back, years later, it seems as if he were forever in the process of getting to 7-Eleven, like Odysseus heading home to Penelope, always turned away or waylaid by adventure and epic misfortune. As a kid, he was the first teenager I knew well enough to think, This is a teenager. This is how teenagers are. This is how I will be when I am a teenager.

That day at the apartment on Zanzibar Court, like he always had in the past, Richard the Famous Bike Jumper didn’t remember me.

He introduced himself as “Rico.”

“Whut up bro I’m Rico y’got a cigarette?” He’d been doing coke all morning. He offered me “a bump,” saying, “Bro, dude, brah, come have a fatty bump,” but I declined. Wordlessly. Shook my head. Sat down in the corner. Stared at my shoes. Thought about dying.

Everyone swallowed their tabs, settled in, and waited for it to come on.

The living room was quiet.

I could smell someone’s sneakers or socks—vinegar, acrid, a faint and bittersweet undertone of dog shit.

It began to rain in earnest, drumming wildly on the big front window until it looked as though we were underwater, the rain streaming down the glass leaving marbled clear reflections rippling on the walls around us.

After the acid hit, Jason and Shane were very quiet for a while and then they talked to each other in some sort of made-up sign language, dead serious, almost grim, before breaking into frantic, crazed laughter.

I frowned and tugged at my shoelaces. I thought of fantasy novels I could be reading, things I wanted to draw. I tried to list my top ten favorite foods containing cheese in order, but only made it to number six:

1) The baked crispy cheese quesadilla appetizer from La Piñata in Old Town, the flour tortilla so crunchy it broke in your hands

5) Linguine with garlic olive oil and parmesan from Giulio’s

Richard the Famous Bike Jumper climbed behind the couch and stayed there, muttering quietly. Every once in a while he said something I could hear. A few words, disconnected. “Crazy elm trees.” “That goddamn Baby Jesus.” Or a sentence. “Oh, hey, yeah, okay, cool plants, Mom, I don’t even care.”

Andy took off all his clothes except his socks and stood in front of the open fridge, talking to something inside it.

The dog was nowhere to be seen.

I sat in the corner, bored, hating my life, nursing a carton of orange juice Richard/Rico gave me earlier, saying, “Here, lonely bro. You look like you need this.”

When Todd Barney’s acid hit, he took off his shirt and dragged the totem pole of TVs out into the center of the room and walked circles around it, angry, beating his bare chest like a gorilla, shouting, “Mr. T! Mr. T! Mr. T!” Todd Barney had shaved his long hesher locks since I last saw him. It was a bad look; his scalp—gray, irregularly buzzed, scarred. He wore stained baggy jeans held up with a studded black leather belt. A tattoo on his shoulder read, “Kill ‘em all.” On the opposite shoulder, a pot leaf.

His girlfriend KellyLee, violently-thin, frail, black-haired with a side-ponytail, climbed off the couch and sat on the carpet. “I don’t think I feel anything,” she said.

Shane and Jason had wandered into the kitchen and were now standing next to Andy, all of them staring into the fridge, reverent, solemn, appreciative.

“I don’t think it’s working.” KellyLee took off her shoes and socks and pushed them under the couch. “Toddhead, should I be feeling something?”

Todd Barney glanced over at her as he speed-walked around the TVs. “Well, I guess … Mr. T,” he said softly, gently, Then he shouted “MISTER FUCKING T!” and began to beat on his chest again.

KellyLee stood up, wriggled out of her jeans then pulled off her tank-top and dropped them behind the couch onto Richard the Famous Bike Jumper.

“I feel all normal,” she said. “Should I be feeling it yet?” KellyLee sat back down on the couch, cross-legged in her bra and panties. “I’m definitely not feeling anything. Somebody pack me a fuckin’ bowl.” She looked at me across the room, shielding her eyes from the light with one hand, staring at me as if I were miles away. “Hey! Hey you! Yeah! Dude! Quiet kid!” she shouted louder than necessary. “Pack me a fuckin’ bowl!”

KellyLee’s teeth were porcelain white and vampiric, the canines lengthening, drawing down into razor-sharp points, her lips blood red, dripping blood, blood running down her pale bright chin and spotting her belly and chest and thighs. She leaned forward and spat blood onto the carpet and laughed. She raised her arms as high as she could and said, “You guys look like a buncha doctors!”

I left without saying goodbye and walked home along the boardwalk in the rain.

As the shapes of watery, galloping horses began to lunge out of the sea (clear and sparkling like ice sculptures), I realized that someone had spiked my orange juice with acid. It was the Ford of Rivendell scene from The Fellowship of the Ring brought to life. In the book, the hobbits, Aragorn, and Glorfindel are chased by the black riders on the Great East Road; the riders swept up by the waters of the Bruinen River, risen to a wild flood by Elrond, and the watery horses sent by Gandalf as an added touch. It was my favorite scene from the book. Witnessed in real life, it was horrifying. I was not the hero. I was a black rider. I was a Nazgûl overtaken by the river, washed away.

I got home at nightfall after being lost in the neighborhood for hours and sat in bed, shaking and terrified until noon the next day, seeing the outlines of bats and skulls in the stucco of my bedroom walls.

At school on Monday, something was wrong. I couldn’t concentrate. Everyone was talking about me and when I turned to look they were doing something else. I saw shadows out of the corner of my eye, figures darting along the edge of my sight.

This went on for a month.

I was obsessed with the growing population. It terrified and dazzled me. I imagined all the babies being born every second—the new lives, and all the other lives besides that, every one of them the star of their own movie and the center of the universe, each one an indomitable sense of self with its trembling, screaming, laughing, struggling consciousness as vividly alive as my own. There was so much thinking inside so many heads it overwhelmed me. I hated them and then I was done hating them, exhausted, and my hate turned to love. I loved all of them. Every single one. I sat in bed thinking about their battles through life, their hopes, failures, their loves, their ambitious plans, and I cried desperately until I slept. I had a breakdown. A nervous breakdown. I was frozen in place, crippled by the immensity of history, the ceaseless chain of births and deaths, the turning Earth, the boundless universe, and my own futile, weak smallness. I am powerless to affect anything, I told myself. I have no say.

I decided it was time for me to die. As graduation drew near, I stopped eating unless I had to. I lived off plums and tap water. At the ceremony in my cap and gown, I was a stick figure in voluminous black, all corners and sharp angles beneath the folds. –Adam Gnade