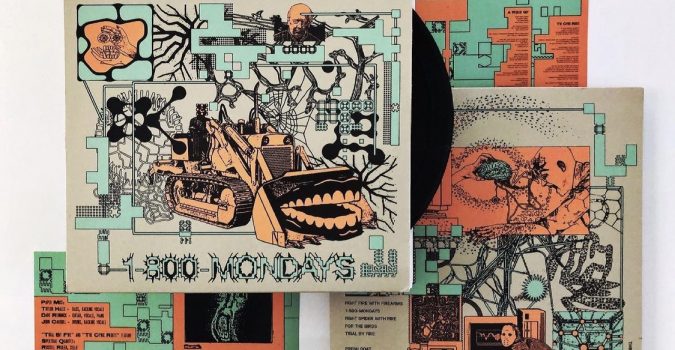 Paper Mice is a three-piece whirligig from Chicago that blends a freakish range of influences into miniature, prog-punk puzzles. Started in 2008 by Dave Reminick, Adam McCormack, and John Carroll, Taylor Hales took over for Adam on bass duties in 2013, and the band has been writing and performing together since that time. The band is a fixture in Chicago’s tight-knit DIY community, performing their high-wire “stop-start mess of rhythmic tics and awkward face plants” for dance-soaked warehouse hounds throughout the Midwest and East Coast. Over the years, they’ve toured and/or performed with musical peers Pinback, NNAMDI, Meat Wave, Melkbelly, Oozing Wound, and The Spektral Quartet, amongst others. Influences include The Beach Boys, The Residents, Abba, The Talking Heads, Nomeansno, This Heat, and Susana Baca.

Paper Mice’s first album, Paint it Pink, featured sixteen short, spastic songs about bizarre news stories, botched surgeries, and hirsute politicians. The follow-up, The Funny Papers (also on Three One G Records), continued the band’s jagged jaunt through the world of current events with eleven tracks about canine heroes, fast-food, financial meltdowns, and Dolly Parton. 1-800-Mondays follows in this quirky tradition, with every song being about weird and ridiculous true stories from the news– in particular, this album often focuses on fire (mainly, people setting things on fire accidentally/on purpose). Channeling The Residents’ strange conceptual brilliance, The Beach Boys’ pop sensibilities, and expertly arranged musical complexity throughout, the band also enlists Grammy-nominated Spektral Quartet, Mike Hogg, and Ben Roidl-Ward as guest appearances on the album. Though the LP has been in the works for almost a decade now due to various roadblocks, surely, the timing is apt for this ode to the absurd, as we seem to be in something of a golden age of insanity when it comes to headlines.