Swing Kids burned fast and bright and ended its run early with a small but volatile and beloved body of work. A Swing Kids song sounds like the band’s trajectory–fiery, tumbling, all youthful crash and burn paired with razor-sharp precision and impeccable timing. The Three One G-released “Situations on Mars” 7″, born on this day 10 years ago, gives another look into one of hardcore’s finest and most lamented.

“Fake Teeth” is a new song and shows the band’s sound refined, bigger, and more confident after years of playing and travelin’ hard post-breakup with acts like Sweep the Leg Johnny, the Album Leaf, Tristeza, Bread and Circuits, the Locust, Retox, and Yaphet Kotto.

Both “Fake Teeth” and the title track, a newly rewritten version of “Situation on Mars,” are classic Swing Kids only better, sharper, and smarter. Guitars sting like poisoned rose thorns and bend around each other like nasty vipers, bass and drums are driven, purposeful, and direct, while the vocals ride free above the caustic tumult–pointed, snarled, half scream, half chant, full devastation.

These songs feel like when you’re so goddamn angry you punch a fucking wall, but by some strange miracle the wall ends up morphing into the face of every enemy you’ve ever had, every bully, every Nazi, every racist cop, every dreamkiller and deathmonger. Instead of drywall and plaster, it’s bone, flesh, teeth. This is anguish and rage turned into wild satisfaction.

The record is over fast, just like the band, and leaves you ready to play it over and over again until it’s engrained into your soft tissue like a first-shaped cattle-brand.

If you missed Swing Kids the first time around (most did), or at the pair of shows in memory of founding member and guitarist Eric Allen, this 7″ is a good opportunity to see why the band mattered and continues to matter. 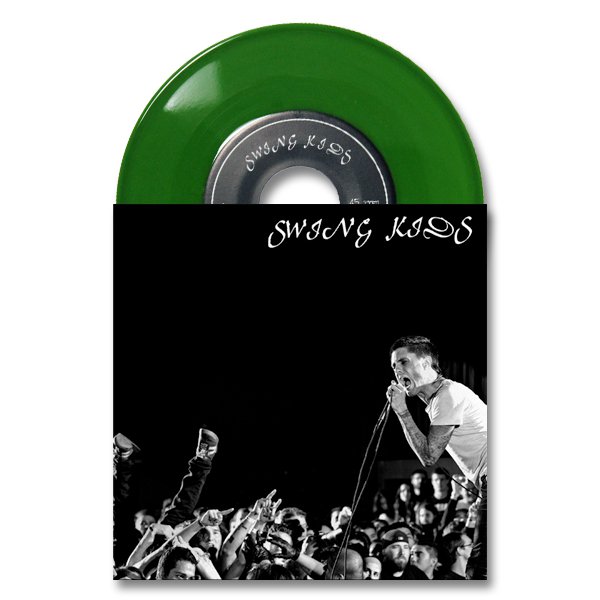