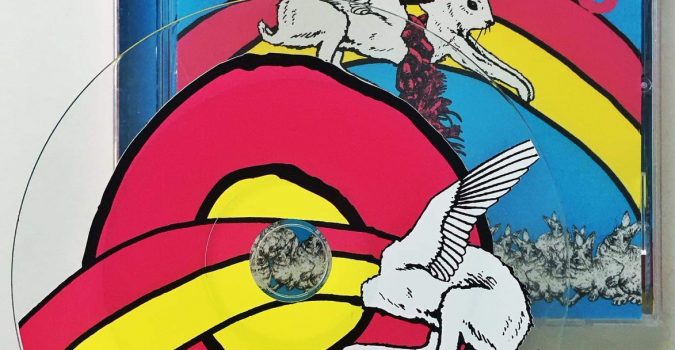 Let’s talk highlights. Seven tracks in almost seven minutes. Members of The Locust, Unbroken, The Plot to Blow Up the Eiffel Tower, and American Nightmare. Spattering blast beats and gruelling thrash. Karen O of the Yeah Yeah Yeahs showing up on the title track. Colored vinyl paired with cover art that’s equal parts disturbing and cute. There are a lot of reasons I love Some Girls’ The DNA Will Have Its Say 7″. These reasons and more should serve as impetus to check back in with the record today–the 16 year anniversary of its release on Three One G.

More reasons: The seven tracks here show a band both ascendant and set to bloom into the weird, fucked-up titan that gave us their now legendary, triumphant, and expectation-smashing Epitaph debut Heaven’s Pregnant Teens. DNA hints at the innovative, high-concept brutality of Heaven’s. Here we see hardcore punk rock revitalized, invigorated, and lent texture as intricate as fine lace but heavier than a planet dropped from the sky.

This is controlled chaos and directed fury, sass and human dirt. In San Diego at the time there was an exciting, fun, vital, rising energy in the scene Some Girls came up in. Records like this felt like gunpowder flashing in the night, unexpected volcanos blowing their top and raining down silver glitter ash and gushing rivers of neon lava. That The DNA Will Have Its Say sounds just as wild, alive, and new as it did the day it was released is a testament to the lasting power of these annihilators.

–Adam Gnade, author of the books Locust House and the DIY Guide to Fighting the Big Motherfuckin’ Sad