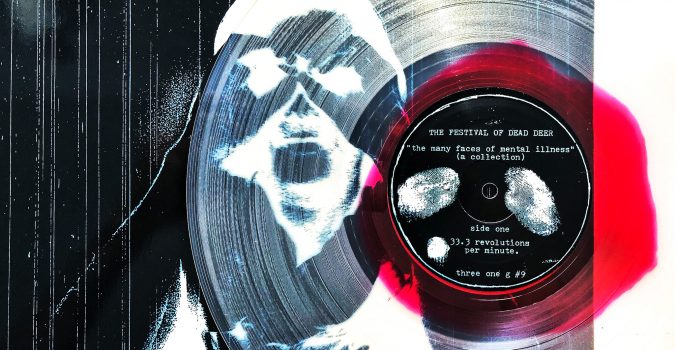 The Festival of Dead Deer’s only LP scared the shit out of me the first time I heard it. It is a menacing record, ominous, and I’d been awake for a very long time. I was living dumb, punk-romantic, and broke-as-fuck in Portland, having left San Diego at the beginning of the year. Two months after the record’s release, American Airlines Flight 11 and United Flight 174 would crash into the World Trade Center. George W. Bush was president. The wars in Iraq and Afghanistan were just around the corner. Even before, it felt like a dark year, as if the events to come were in the air, events that would change the culture and trajectory of America and usher in a new age of shit.

The Many Faces of Mental Illness is a lacerating, savage, nightmare of a record. The band was bassists Chris Hafner and Dylan Gordon, Chris Hathwell, who would go on to play in Year Future, Moving Units, and Ground Unicorn Horn, and guitarist/singer Mike Crain, who played in Retox, Kill the Capulets, and now Dead Cross. That Festival’s music sounds like none of these is a testament to something. To what? To drugs? To whatever was going on in the band’s life in LA? To the spirit of the era? That’s not for me to say, but this record is an original, not quite hardcore, punk but not “punk,” brutal but also frail, artsy yet completely unpretentious.

My favorite track on the record, “A Controlled Response,” starts quiet and noisy, the guitar cycling through a meditative repetition that stands in contrast to the previous song’s relentless assault. Soon the bass and drums join in, and the song rolls forward, slow, heavier by the minute, building in intensity, before quitting out entirely and segueing into the hellfire of “In Fifty Words or Less.” This is a record that feels like a live show. You can see the band on stage, feedback droning, Mike shouting things between songs that might be stage banter, might be part of the music, the lights low, the vibe heavy, just fucking HAUNTING our shit.

–Adam Gnade, author of the Three One G-released books Locust House, This is the End of Something But It’s Not the End of You, and Float Me Away, Floodwaters