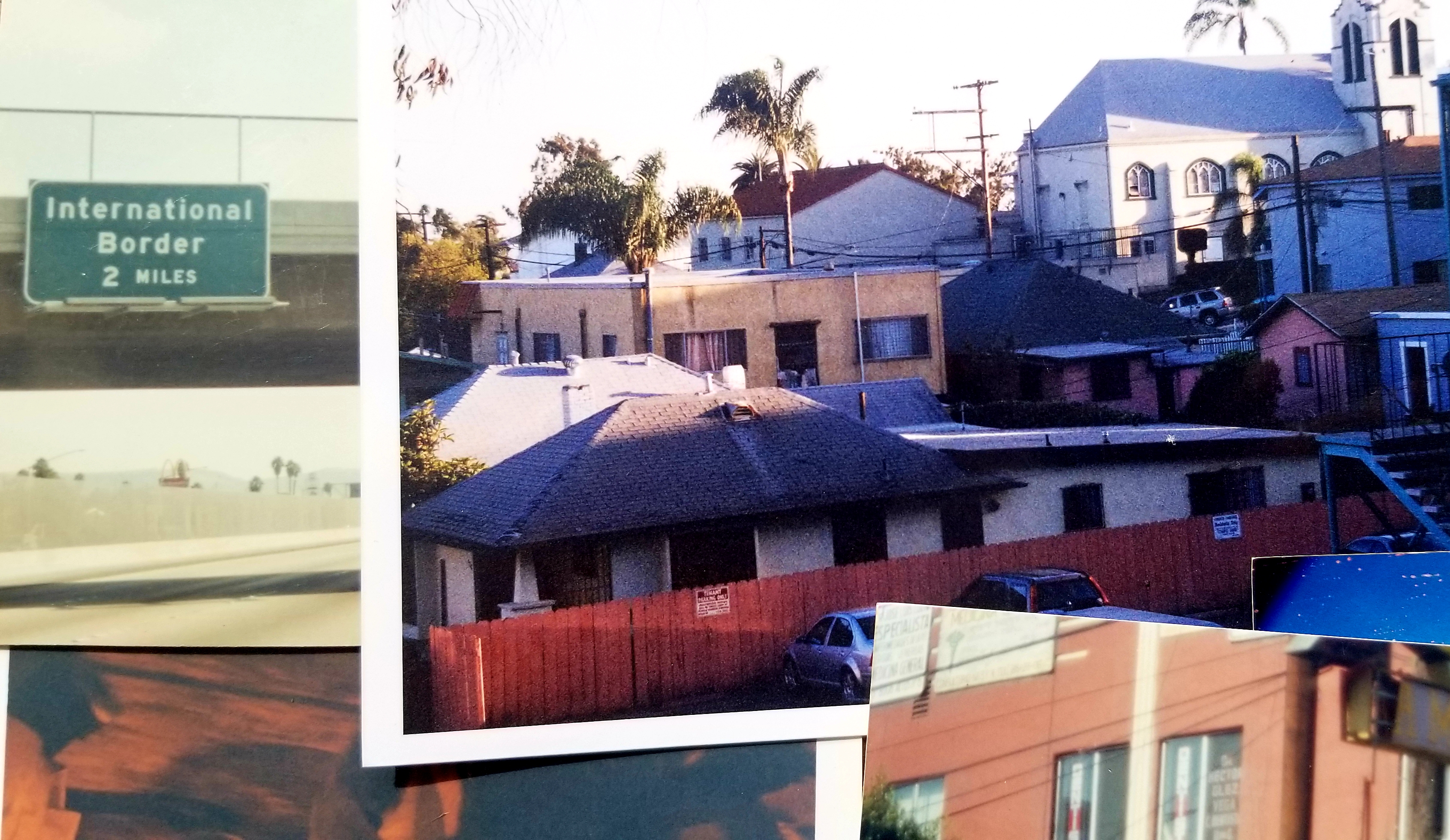 Who Are the Mystery Girls?
A Short Novel in Serial Form
Chapter 3, The Archangel and the Miata
By Adam Gnade

Agnes and Marigold left Gabby’s apartment and got in the car just as it began to rain.

“Thanks for not making me sit in the car-seat,” said Marigold, pulling her safety belt across her chest and buckling it at the waist.

“You’re supposed to be in a car-seat?” asked Agnes.

“Officially. I’m still too small for the regular seat.”

“Is that gonna be a problem? What happens if we get in a wreck? You’re not gonna go flying through the window are you?”

“You think you’ll be fine. Where’s this car-seat? Let’s go get it.”

Agnes turned the wipers on, and they began to clunk back and forth.

“Nena has this cousin called La Shy Girl and she’s borrowing it with her boyfriend Junior and their daughter Sandra. They’re at the dentist down in TJ all day.”

“Today gets better and better. Wait, aren’t you supposed to be in school? Last I checked Halloween’s not a bank holiday.” Agnes struggled with the parking brake. “This fucking thing’s stuck.”

The parking brake released with a muted thump.

“Nena leaves early every morning to put in applications with her sister and when she left this morning I faked sick so she’d call the school and tell them I wasn’t coming.”

“Why, so you could sneak around graveyards?”

“Kids … are … mean to me.” Marigold said this quietly, face turned to the passenger window.

Agnes began to pull out of the spot then put the car back in Park and pulled the brake. “Kids were mean to me too. They call you names?”

“Yeah. Like a lot,” said Marigold, staring down at her hands in her lap.

“I was the Pale Whale for a long time because kids thought I was fat. I wasn’t. I mean, I just … I was a kid. I was a stubby-ass little kid for a long time while everyone else started to grow. Oh, and some kids called me Moby Dick, that was a nice variation. Loved that one. Always whale-themed. When I went through my goth phase they called me Baby Shamu—y’know, fat kid, pale skin, black clothes. Real cool, guys.”

“See this costume?” said Marigold. “I wear it a lot. Like all the time. Not just on Halloween, but Halloween is my favorite thing. It’s also a … a really bad day for me to be at school. I get teased even worse on Halloween.”

“They call me Bat Baby because I used to have a bat costume my mom made that I would wear to school every day, but Anna Copper grabbed the back of the neck of it and tore it off me in front of the whole school at an assembly.”

“Anna Copper sounds like a piece of shit.” Agnes released the parking brake, put the car in Drive, and pulled away from the curb.

“Yeah, Anna Copper,” said Marigold quietly, watching the row of apartments passing by the window as they drove up 20th. “She used to be my friend two years ago, but now … I dunno. Last week … last week she threw a snail at me when we were waiting in line for the bus and told me to go get married to the Addams Family. The snail died because its shell got broken. I buried it in a box a ring came in.”

“Fuck Anna Copper. Next time you see Anna Copper and she does anything like that, I want you to punch her in the fucking Anna Copper face.”

Agnes made a right on B Street and pulled behind a line of traffic. It was raining harder now—the drops drumming on the car top with a sound like popcorn popping, the water streaming down the windshield in the places the wipers didn’t reach.

“Nena says violence doesn’t solve anything, it only makes it worse.”

“Nena’s wrong, Marigold. Not all violence is bad.”

“YEAH, really. You can’t be a pushover or people will pick on you forever.”

“A pushover is someone people push over?”

“Yeah, I guess, kind of. It’s someone who lets people boss them around and treat them badly and doesn’t do anything about it. Once people learn you’re a pushover they never stop taking advantage of you. So, yeah, don’t be that.”

“You know what’s not a pushover? A bat baby. A bat baby would rip someone’s throat out and drink their fucking blood. What are you going to do the next time Anna Copper starts shit with you?”

“In the fucking face.”

“I’m gonna punch her in the fucking face.”

“Fuck YEAH you are. You do that and you’re gonna get in trouble but, you know what, people are wrong when they punish you for fighting back. Listen, if you get in trouble for punching Anna Copper I want you to tell your brother and he’ll tell me and I’ll buy you an ant farm and you can get to know them and give them all names then set them free if you want. Deal?”

At Humberto’s, Agnes and Marigold took a booth by the window. The one-room taco shop—bright lit, a wall of menu photos, cumbia over the speakers—felt like home to Agnes. She and Gabby were snobby about their taco shops. Rancho’s, Pokez, Humberto’s, Saguaro’s, or nothing else. Agnes thought of all the meals of years past at Humberto’s—late-night burritos with Gabby after house parties or shows in the tunnels, a morning carnitas or machaca plate before she quit eating meat—mornings after being up all night running wild with Gabby, sober mornings because Agnes stopped getting high and drinking after Michael the Bear died, late nights with a slurry, laughing Gabby, drowsy afternoons alone doing homework by the fogged-up windows on rainy days like today.

“That’s us.” Agnes got up and came back with their food on a red plastic tray.

“Sooo, okay, TWO plain quesadillas,” she said, handing Marigold the foam plate with folded tortillas leaking orange cheese out the side. Also, chips, side of guac, side of sour cream, green salsa, hot carrots, a side of limes, and a can of Coke for you. Fanta and an Agnes Special for me.”

“It’s what Archy calls a burrito with—”

A hulking giant of a man in a food-spattered white apron, stained white pants, and a white t-shirt pulled a chair up to the end of their booth and sat down on it backwards, crossing his tattooed arms on the chair’s back rest. He wore a spotlessly clean black baseball cap with a white embroidered Old English “13” on the front and a thin, wispy mustache, both of which he’d had since he and Agnes were in middle school.

“Oh you know, girl, the same ol’ shit. How you doin’, baby? You still busting people’s balls?” He laughed and shook his head.

“Eddie Ramos’ little sister, yeah,” the big man said with a respectful nod. “I like your pumpkin suit. You look like a bad-ass.”

Marigold smiled and blushed and looked down at her food.

Arcangelo turned back to Agnes, serious now. “I know you heard about Gabby and girl I am SO sorry. Fools been comin’ in here talkin’ about her all morning like it’s some America’s Most Wanted shit. I wish I knew who took her. Bury those motherfuh— sorry, Marigold –bury those … people in the desert somewhere.”

“Archy, do you know anything about—” Agnes lowered her voice “—Gabby coming into a buncha money? Like 50 or 60 grand?”

“Girl, you didn’t hear it from me, but … look, Gabby drove here yesterday. She DROVE, like in a CAR, and girl I ain’t ever seen her behind the wheel of anything but the Swan if she was borrowing it—” he said, nodding in the direction of the white Toyota parked in front of the restaurant “—or your old Civic before it died. Homegirl rolls up in a brand-new 2002 Miata, silver like a bullet, with her name on the plates. ‘666abby’ with sixes instead of Gs because, y’know—”

“I was like GIRL where did you get THAT?”

A hipster couple walked through the entrance as the bell over the door dinged. Dressed nearly identical in all black—tight jeans, Converse, denim vests over hoodies—they stood, arm in arm, looking up at the menu.

“Be right witchu,” Arcangelo said before turning back to Agnes and Marigold. “Lupe’s just went on break. I gotta cover the reg, but real quick, Gabby got all cagey and shit and danced around the question then paid with a hundred, which I couldn’t accept. Gabby … yeah, she’s found her way into some money somehow and she got all evasive about it.” Arcangelo stood up then leaned down and kissed Agnes on the top of the head. “Happy Halloween, mija. There’s a party at the Pirate Radio house if you ain’t busy. Oh wait, this is weird. Right before she left I look out at the car and there’s this dude in the passenger seat sittin’ all low like he didn’t want no one to see him.”

“I dunno. Small, skinny white guy? I couldn’t tell. He had a hat on and sunglasses and he was slouched like he was tryin’ to keep it on the DL. I gotta go. Sorry. That’s all I know.”

Arcangelo went back into the kitchen and Agnes unwrapped the yellow paper from the front of her burrito and took a bite.

Marigold had finished her first quesadilla and most of the second and sat staring out the window, eyes distant, watching cars idling in the rain at the stoplight. The day had gone from sunny to overcast to dark gray; the brakelights streaked and smeared a glassy red as seen through the rain-spotted window of Humberto’s.

“Agnes, do you think that small, skinny white guy was Damien Bixby?”

Agnes set her burrito down on her plate and wiped her mouth with a napkin.

“How do you know about Damien Bixby?”

“Just something my brother said when I told him about the graveyard. He was like, It’s gotta be Damien Bixby that took her.”

“He say anything else?”

“I asked him who Damien Bixby is and he was like, If Gabby’s got an enemy it’s him, and then he told me about how she beat Damien up at a party—”

“That actually happened three times,” said Agnes, holding up three fingers with her thumb and pinky crossed. “We called it the triumvirate.”

“—and how Gabby spray-painted a giant … y’know—” whispering “—a giant penis on his parents’ front door on Christmas morning.”

Agnes laughed then took a bite of her burrito as the hipster couple sat down at the booth behind her.

“It was gold spray-paint. I stole it at Home Depot and helped fill in the … I helped fill it in. That was in retaliation for Damien trying to blackmail Gabby over some Suicide Girls photos she had done that they rejected for being too fucked-up or depraved or whatever it was they said in their email.”

“It’s this … it’s a website you should never go to where girls my age have pictures posted of themselves without clothes on.”

“So Damien Bixby found some of those photos?”

“Stole ‘em. They were on Gabby’s digital camera. He grabbed it from her backpack at a party and wanted her to … he wanted things from her and if she didn’t … do those things, he’d put the photos online. Of course Gabby WANTED the photos online so his threat was pretty who cares.”

“Damien Bixby? Organizing a kidnapping? I wouldn’t be surprised. He has money and a reason—a FEW reasons. That little fuckin’ snake.”

“We gonna shake him down, Agnes?”