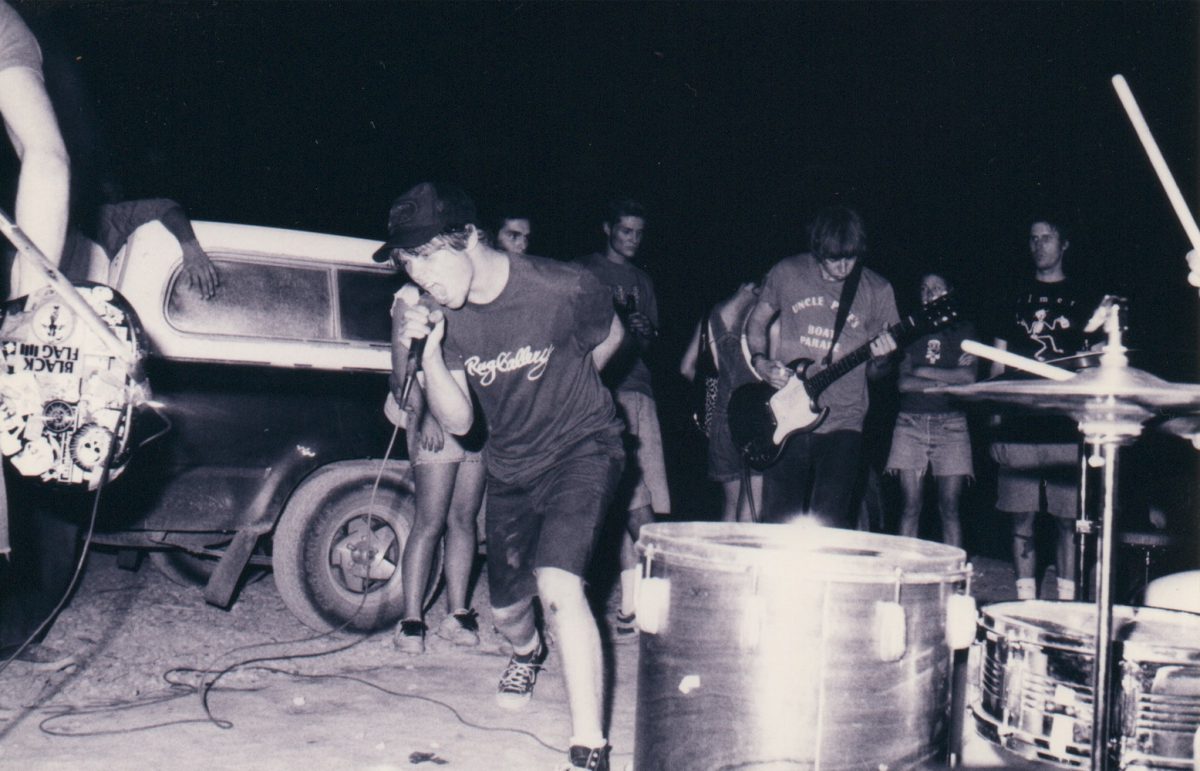 If a record can stand in for a time period, Black Dice’s Peace in the Valley 7” is June of 2001 for me. Ritual is a big part of building memory. Do something enough, and do it in more or less the same way each time, and that act and the time in which the act went down will be seared into the fabric of who you.

The early summer of 2001 was my first summer after leaving San Diego. It was a Portland summer which of course follows a Portland winter and if you’re a San Diego kid a Portland winter will fuck you up a little. All that gray and listless rain is not a good thing for someone with sunshine in their DNA.

So come summer, the world outside felt like a revelation, and I spent mornings sitting in the open doorway to the Gresham, Oregon house I shared with Ezra Caraeff and Jessie Duke. That winter I’d found a cardboard suitcase record player at Goodwill. Five bucks. Blue and white striped. Terrible sound, but it played records and I had nothing else that played records and because of that it was a friend.

I had a stack of records I’d play on those nice, warm mornings, but the one I remember most was the Black Dice 7” and hearing it now brings that time back in vivid color. The smell of the world blooming. The heat of the sun on my face. All the important pieces inside me warming to a thaw.

My ritual was as follows:

1 Get Ezra’s extension cord from the hall closet

2 Plug the record player into the extension cord

7 Then play it (at both speeds) while waking up and maybe drink coffee if we had any or try to write something. Mostly I’d just let myself wake up. Wake up and take in the morning. I have never since had so little to do.

I have listened to this record on both speeds so many times I’m not sure if I remember which is the right one, and I don’t think it matters. Peace in the Valley sounds like nothing else and 21 years after its release it’s still just as vital and unique.

It’s some kind of harsh/mellow, psyche trance-out that is equally weird as it is beautiful. The drums march forward like a dozen tiny horses over shrieks of guitar before everything explodes and collapses into a thrashing vomit then dips into strange new realms that exist somewhere between noise and new age. That’s side A.

Side B is closer to the Black Dice albums before that—deconstructed hardcore, something like this: imagine that a power drill gets a job as a music producer and decides to scramble a traditional punk song and mix around all the pieces until anything you think of as “song” is turned completely on its head.

This record and its book both give me a deep sense of calm that is unlike anything I know from music, past or present. Peace in my valley. Maybe yours too.

–Adam Gnade, author of After Tonight, Everything Will Be Different and The Internet Newspaper

For more on Black Dice, check this out: