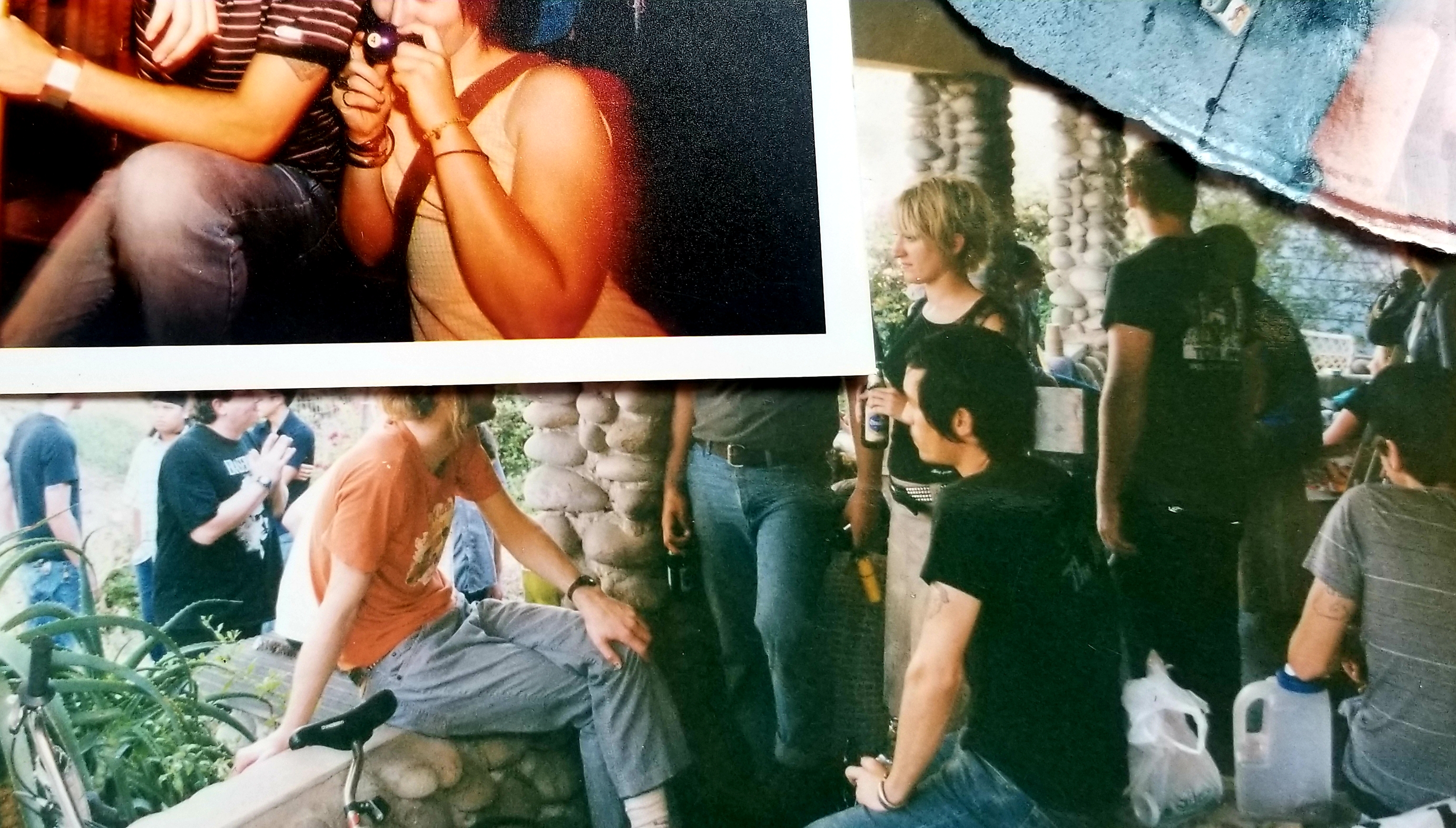 Who Are the Mystery Girls?
A Short Novel in Serial Form
Chapter 5, The Padre and the Witch
By Adam Gnade

Agnes and Marigold parked a block down from the Pirate Radio House then walked up the sidewalk through a canopy of trees toward the noise of the party. Across the street, groups of costumed children ran from house to house carrying orange plastic jack-o-lantern buckets and pillowcase candy bags.

“Marigold, isn’t it a little early for trick-or-treating? You’re the resident kid here … ”

Marigold shrugged. “I dunno. As long as I can remember Halloween is supposed to end at 8. That’s what Nena always says.”

“That’s dumb. When I was your age … ugh, I can’t believe I’m actually saying this … fucking when I was your age bullshit. Anyway, when I was your age, which was only 12 years ago, alright?, all the kids on my street would cram in one car and they’d drop us off in La Jolla and we’d trick-or-treat rich people’s houses until they stopped opening their doors. We were like a plague on those motherfuckers.”

“Nena just lets me walk down our block, sometimes up as far as Jaycee’s like last year.”

“Fuck no. That’s crap, Marigold. If I were your aunt, I would take you to the rich neighborhoods and show you how it’s DONE. You get full-size candy cars, Snickers, Milky Way, Butterfinger, Three Musketeers, full bags of candy corn, money sometimes.”

A pair of kids—a short, flush-faced Harry Potter and a thin, spindly vampire with a widow’s peak drawn in black makeup on his forehead—walked past them.

“Rich people actually give you money?”

“Not all of ‘em, but sometimes if you hit the right spot up in La Jolla or out in Tierrasanta, you’ll get a couple bucks. Even a five.”

“YEAH, cool. We’d always hit those houses twice. Put like an hour between it and they never remembered you. In our neighborhood you get, like, what? One little Bit-o-Honey or a Smarties or a Starburst. A fucking Tootsie Roll? Maybe a mini Hershey’s. Maybe.”

Up ahead, a group of people stood smoking on a wide, stone-pillared, Craftsman-style porch. Others sat in the grass or on the bumpers of cars with bottles of beer or jugs of wine.

“This is the place.”

“Not all adults dress up. Most don’t.”

Inside the house a few people sat on the carpet up against the wall waiting for the band to play and a crowd in the kitchen pressed around someone pouring shots.

A Lord of the Rings elf walked past them, cigarette tucked behind her left ear, and Marigold smiled at her and tugged Agnes’ arm.

“Agnes, SOME adults dress up!”

“This is true. Some adults dress up. Look over there. A zombie airline pilot. I think that’s my friend Greg from work.”

“Zombies scare me, but I love them,” said Marigold with a sigh.

“Oh, and that guy right there with the mask? I don’t know what he’s supposed to be, but he’s in this band I really love called Beehive and the Barracudas. Their singer Tracy’s my hero.”

“If I’m ever in a band it’ll have a cool name like that,” said Marigold. “Marigold and the Bat Babies.”

“I would buy that band’s record in a second.”

In front of the living room’s bay windows, the band took its time setting up. The drummer sat behind her kit hitting a stick against the snare and leaning forward to tighten the drum pegs. The guitarist knelt on the floor, unlatching the clasps of a black flight case, opening it to reveal a dark red Gretsch Electromatic. The keyboard player stood behind his Moog, rolling a cigarette from a small pouch of tobacco while the singer sat on the windowsill, legs crossed at the knees, holding a mic by its cord. He dangled the mic, then swung it around in a circle, catching it with his other hand. The singer stood up, put his hands on his hips and stretched his back, then walked out the front door, singing a Black Heart Procession song in a crooner’s voice, “It’s a criiiime. I never told you ‘bout the diamonds in your eyes.”

“Whoa, he was cool,” said Marigold, watching him walk down the porch steps and away from the house.

“His band sucks, but they’re kinda fun. It’s like a shitty version of this rad band Le Shok.” Agnes looked around the room. “Maybe Damien’s out back. Come on, Marigold.”

“Can we watch the band?”

“Once we find Damien.”

Agnes and Marigold took the back porch steps to the yard—the sky to the west pale orange with long streaks of faded blue and the bright white rocket contrails of jets fading away, a quiet autumn dusk.

As they walked into the center of the back yard, Agnes heard a familiar voice.

“Fuck,” Agnes said under her breath. “Fuck, fuck, fuck.” She stopped walking and turned around. “Marigold. Stand behind me.”

A tall, stocky girl dressed in a yellow and brown Padres uniform with a dark red makeup wound drawn across the left side of her face stepped out of the crowd.

“Agnes McCanty, bitch you got NERVE!”

“Hi Erin. Today is absolutely not a good day for—”

“Naw. Naw! I should beat your ass right now for showing your bitch-ass narc-ass ugly grill.”

A short girl dressed as a witch with a green face and a tall, black, pointed hat joined the Padre.

“This fucking ho is the bitch-ass narc-ass bitch that got Victor put away last year.”

Feeling her temper rise, Agnes tried her best to stay calm. She smiled, but it was an angry smile—a wide, grimacing, teeth-set smile. “Look. Erin. Erin’s friend. The way I understand it, Victor went to jail because he was selling illegal guns to fucking Klantee fucking White Aryan Resistance assholes. The police put your boyfriend Victor in jail. I didn’t have—”

“Victor’s not my boyfriend … he’s … oh you little blonde bitch rat don’t you fuck with me.”

“Erin, it’s a party. Parties are fun. Party people are fun people. How ‘bout you go your fun way and I’ll go my fun way and at some point … at a later date … we’ll settle this the right way.”

“Naw! This shit’s happening.” The Padre squared her big shoulders, rolling her neck. “I’m gonna beat this little bitch down for Victor’s sake.”

The Witch looked at her friend, shocked. “You can’t hit her. She’s pregnant!”

The Padre put her fists up like a boxer. “Her FACE ain’t pregnant.”

Agnes stepped back, Marigold behind her.

Just then Arcangelo emerged from a group standing by the keg and stepped between them. He had a red Solo cup of beer and he wore a pirate’s bandana, a drawn-on scar across his cheek, and a plastic eye patch with his signature black t-shirt and tan Dickies.

“Erin, walk away,” said Arcangelo quietly. “Girl, walk away. We don’t want none of this. Not here. Not now.”

The Padre shook her head, pointing at Agnes. “Naw, she’s—”

Arcangelo leaned closer, lowered his voice and said something Agnes couldn’t hear, and the Padre and the Witch turned and walked to the other end of the yard.

“Yeah, pretty fancy, Agnes. You alright, girl? I don’t know who invited those Santee Nazi fools, but they’re all over the place tonight.”

“You know I got your back, girl. No more sea monsters tonight.” Arcangelo took a sip of his beer. “Hey, I heard you were looking for Damien Bixby.”

“You know, girl, you know. Hey Marigold, Agnes take you trick-or-treating yet?”

Marigold stepped out from behind Agnes. “We got too much business.”

“Wow, too much business, huh? Agnes, you better take this kid to get some candy before it’s all gone. Hey, I gotta split, but look over there real quick—” Arcangelo said, pointing across the yard. “Bixby, Damien Louis, the third. He’s with some English girl on a bench behind the tree.”

“You owe me nothing, kiddo. I got you forever. Late.”

Arcangelo leaned down to hug Agnes then ruffled Marigold’s hair. “You girls stay safe tonight,” he said, then walked back to the group standing by the keg, raising his arms above his head, shouting, “Big Marcos! Homie! You made it!”

“I heard what he told that tall girl,” said Marigold.

Agnes didn’t realize they were holding hands until she looked down.

“He said he wasn’t going to do anything, but that his sister was here too and if his sister saw what was happening … that’s all he said.”

“Arcangelo’s sister Norma is the toughest fucking chola in the world. I once saw her punch this girl who was sitting in the passenger seat of a car. The car window was rolled up and Norma just punched right through the glass and knocked this girl out. She also knocked this guy down who was running away from her once by throwing a crowbar at his legs.”

“It was pretty bad-ass. The whole Ramirez family are like action movie heroes.”

“Marigold, you wanna stay here? This might get ugly.”

Holding hands, they walked across the yard to Damien Bixby.