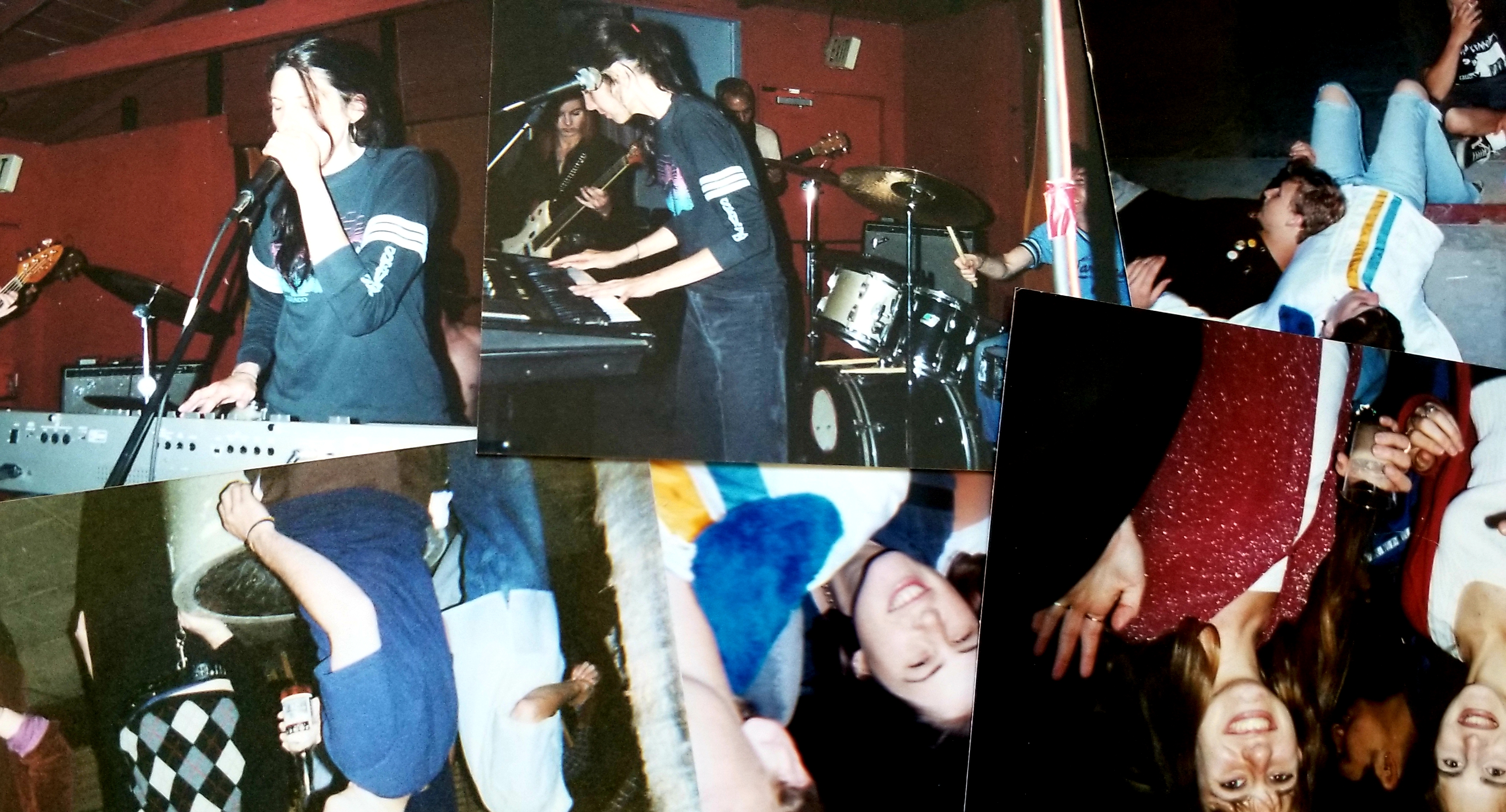 Who Are the Mystery Girls?
A Short Novel in Serial Form
Chapter 6 of 13, Damien and Debsey
By Adam Gnade

A map first of the backyard—in the northeast corner of the rectangular plot a group stood gathered around the keg, including, but not limited to, Arcangelo Ramirez, his tough sister Norma (famous for her acts of heroic violence), the band’s drummer and her twin sister, and Big Marcos (a former Halloween store employee of Agnes’ ex, Steven Boone, the man responsible for her “present condition” as she preferred to call her pregnancy). In the northwest corner—an orange clay chimenea stove with a round body and a tube chimney, standing approximately four feet tall and surrounded by three quarters of the band, who stood sharing a cigarette before their set and warming their hands as the red embers in the stove’s belly crackled and settled in the blackness.

In the southeast corner—thin trees, the ruins of a garden, the empty plastic basin of what was once a decorative fountain meant to look like a small rocky waterfall. Tucked back behind a thicket of ice plant, lantana, and yellow flowered sourgrass—a garden shed and someone inside smoking a joint, the red cherry flashing for a brief moment in the darkness then shifting out of view. In the southwest corner—a large oak planted 110 years before by Friedrich-Wilhelm Nachbarschaft who, as local legend went, buried the skull of his father Karl-Wilhelm with the oak seed to ensure prosperity for his vineyard, the land of which was now covered by the neighborhood’s rows of post-War tract homes. Behind Friedrich-Wilhelm’s tree—a high-backed redwood park bench built in 1994 by then-resident Alejandro Lopez Aguirre with the aim of “slowing down my life and not letting the days pass me by as they are.” Sitting on the bench—Deborah “Debsey” Murray of London’s Crouch End neighborhood and, next to her, Damien Bixby.

Agnes and Marigold’s first sight of Damien Bixby once rounding the tree was, in the words of Agnes, “kind of a massive mind-fuck.” Damien and Debsey, cuddled together on the bench, spoke quietly, Damien gazing into Debsey’s luminous green eyes, laughing as she said, “My cat Nigel became some sort of manic whirling helicopter whilst the kestrel flew about the summer house” to which Damien replied, “I could listen to you talk about cats all night.” Neither Damien nor Debsey (who Agnes and Marigold recognized immediately as the Lord of the Rings elf from inside the house) saw Agnes and Marigold and continued to talk as they (Agnes and Marigold) stood next to the tree, faces lit orange by the firelight of the chimenea, which now burned wildly as it consumed the phone book the singer of the band found on top the fridge inside the house and decided to “destroy all record of.”

Damien smiled, stroking one of the twin braids of Debsey’s dark red hair, closing his eyes now, content, as Debsey, one hand on Damien’s left thigh, the other clutching the neck of a bottle of Charles Shaw melot said, with teeth stained red by the wine, “You would’ve loved my cousin’s cat Chimsa Hoy. He was WELL good. Ages ago he was called ‘Chips Ahoy’ like the cookies, but when Fiona adopted him she couldn’t bear to yell ‘Chips Ahoy! Chips Ahoy!’ to call him. Can you imagine a cat called Chips Ahoy? She said it seemed far too demeaning so she chose Chimsa Hoy, which growing up felt a bit mysterious, like something from Kipling.”

Agnes cleared her throat and Debsey and Damien turned to look.

Damien, unexpectedly, uncharacteristically, raised both arms as if to offer or receive a hug and shouted, “Agnes McCanty! I am SO glad to see you!”

Damien Bixby had short black hair and a low brow that, paired with thick connected eyebrows, gave him a sort of rough, angry apish look. His eyes—small, black, birdlike. His clothes, indistinct—ill-fitting black slacks, neither tight nor loose, a black wool sweater, expensive but not stylish or showy, and overly tight around the middle. Debsey by contrast wore her costume so naturally it seemed as if she truly were the character she was portraying, as if a beautiful, elegant red-braided wood elf stepped out of the pages of Tolkien and had, by some strange act of enchantment, fallen in love with cruel, beetle-browed Damien Bixby.

“I’ve yet to meet any of Dame’s mates,” said Debsey. “It’s WELL good to finally meet one.”

Agnes shut her eyes tight and pressed the tips of her fingers to her temples to clear her thoughts. As she opened her eyes she saw Damien stepping toward her, arms out, and then his arms were around her and he (Damien Bixby!) was hugging her. Hugging and patting her back with his left hand saying, quietly, “I’m so sorry for all the shit I’ve done to you guys and I’m so sorry to hear about Gabby. But I’m happy, Agnes. I’m in love and I’m happy and let’s … we should put all this behind us. Can we do that?”

Agnes pulled away from the embrace and stepped back until she felt the bark of Friedrich-Wilhelm’s tree behind her through the thin fabric of her striped tanktop.

Marigold stepped in front of Agnes, picked up a large stick from the grass at her feet, and held it out before her.

“Don’t come any nearer,” said Marigold. “I know all about you, Damien Bixby.”

Agnes pulled Marigold in front of her and crossed her arms over her (Marigold’s) shoulders.

Finally, Agnes spoke. “Damien. Did you have anything to do with Gabby’s … uh, her … Damien, did you kidnap Gabby?”

Damien sat back down on the bench and threw an arm around Debsey.

“Damien, you and Gabby are mortal fucking enemies.”

Debsey pulled away from Damien. “Dame? What’s this about?”

“Debsey … Agnes … I didn’t have anything to do with it. I know Gabby and I were never … yeah, we hated each other, but—”

Damien looked from Debsey to Agnes then raked his nails across his closely-cut scalp.

“Okay, so Gabby Martinez is Agnes’ best friend,” he said. “The girl I told you about on the way here. The one who was kidnapped this morning. Agnes, my world has—” he smiled and shook his head, looking down at his hands “—my world is different now. Ever since Debsey and I … ever since that first week in London I’m not the same person. I hold no … not an ounce of resentment about how Gabby treated me and I’m sorry for all the asshole shit I did to her, but no, I had nothing to do with her kidnapping.”

Marigold looked up at Agnes. “Agnes, you believe this shit?”

Agnes lowered herself to the grass and sat cross-legged then leaned back against the tree.

“Yeah, actually I do. I can’t believe I do, but—” she stared at Damien intently for a moment. “He’s telling the truth.”

“Thank you, Agnes,” said Damien, taking the wine from Debsey and pulling the cork out.

“Will someone please explain what’s happening?” asked Debsey. “I’m drunk but not that drunk.” She pulled the rubber elf ears off her own and set them in her lap.

“Later,” Damien said. “I’ll tell you all about it later. Agnes, I was hoping to run into you, and I’ve … I must have called your apartment 99 times. You need to get yourself an answering machine.”

“She hates answering machines,” said Marigold, who now sat next to Agnes in the grass, the firelight flickering across their faces as it dimmed.

“Is that who you were calling?” asked Debsey. “I was beginning to worry you had an American paramour.”

“Paramour,” said Damien smiling. “I love when you say things like paramour.”

“Why were you calling me? I’m sorry, I’m still kind of shocked and I feel like this is some Invasion of the Body Snatchers shit.”

“Who are the Body Snatchers?” asked Marigold.

“Tell you about them later,” said Agnes.

“Agnes, I was calling you because before I picked Debsey up at the airport I went by Tavis’ place to buy some … uh … some, you know, some stuff for the party. I got there and he was tearing the place apart. It felt like a movie. The door was open and I looked inside and he’s pulling drawers out of the dresser and dumping them, grabbing boxes from the front hall closet and digging through them, tossing everything behind him. Which is weird.”

“Right,” said Agnes, nodding. “Which is weird because Tavis is the chilliest guy of all time.”

“Exactly,” Damien nodded. “Tavis never touches his own shit. He smokes weed, but … he was coked-up out of his mind, Agnes. I stood there in the doorway and he didn’t even see me. He stopped to snort a line off the top of the dresser and then he was back at it. The last thing I saw was Tavis pulling a black duffle bag from under the couch and taking a pistol out of it and I … I took off. I was gone.”

“I told you we needed a gun,” said Marigold quietly.

Debsey stood up. “Seeing as how I’m completely lost I’m going to get my cigarettes out of the car. Don’t stop for my sake.”

Damien looked up, “I’m sorry, babe. I’m almost done.” He took her hand and she sat down again. Damien brought her wrist to his lips and kissed it twice. “Just a second longer.”

Agnes picked up a twig and dug it into the dirt patch in front of her, carving the letters “W … T … F.”

“So I left. Being around people on cocaine kind of ruins doing it yourself, and the gun? That was too much for me. If you want to talk to somebody about Gabby’s disappearance, her gun-toting, coked-out boyfriend would be a good start.”

“Right, right,” said Agnes softly. “But who knows where he is. I mean, Halloween and all.”

“I do,” said Damien. “We’ve been here less than an hour and on the way we drove past Tavis’ apartment and his car was still out front, the front door still open. I think Tavis is staying in for the night.”

Marigold stood up and brushed the grass off her pumpkin costume.

“I’m serious, Agnes. Things are different now. All this … all this petty shit I did … I feel terrible. I remember walking through Crouch that first night I met Debsey and … and it was foggy and the streets were wet and no one was out and we’d hardly said a word to each other, but just seeing her at the party and the few words we exchanged and knowing … knowing the next day I was going to get her number from someone and call her and … I kept thinking, ‘After this everything will be different.’” He wrapped his arms around the smiling, blushing Debsey and pulled her to him. “Agnes, I’m happy.”

Walking across the yard back to the house Agnes was quiet. Tavis. Tavis Gregory. Gabby’s boyfriend. Why hadn’t she thought of it earlier? Because he and Gabby were so happy together? Because Tavis was such a calm and relaxed presence in her messed-up, chaotic life?

“Marigold, if we’re going to go see Tavis we need a little back-up.”