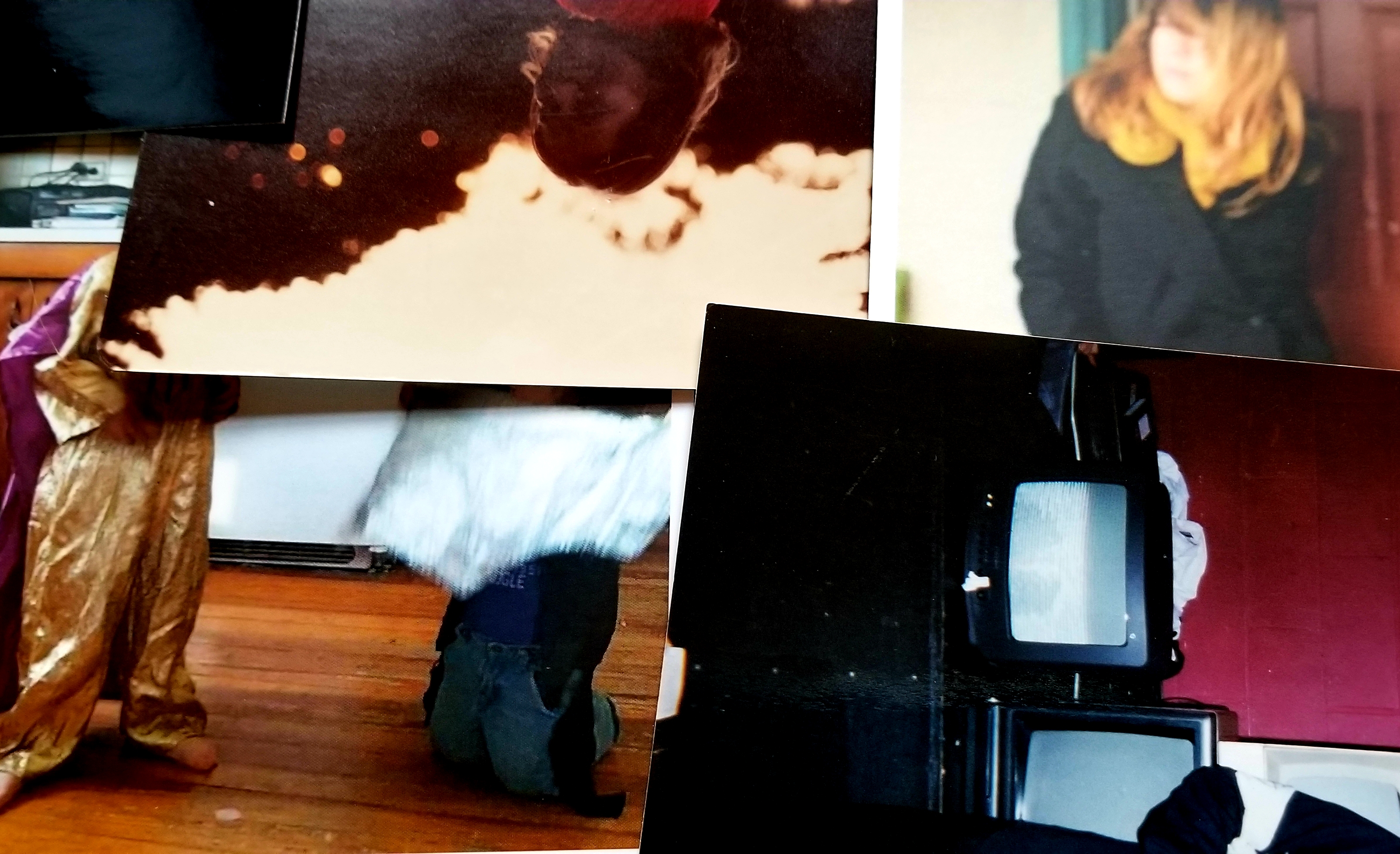 Who Are the Mystery Girls?
A Novel in Serial Form
Chapter 7 of 13, Juan Carlos and Yolanda
By Adam Gnade

Norma slept in the backseat on the drive from Golden Hill to Clairemont while Marigold stared out the passenger window at the black sky and the lights of the city and the cars passing them on the freeway. As she drove, Agnes talked about her family. Her mother dead. Her guardian, her father’s uncle Michael the Bear dead. Her father in jail for life. Everyone but a handful of scattered cousins gone. Few memories of her father, less of her mother, and the ones she had fading more each day—the smell of rose soap while sitting in the bath at night and her mother singing “Blackbird” in the next room. A dinner table and her father pouring red wine from a dark green bottle with a bright white label and gold text on it catching the candlelight. Her mother’s thin silhouette in a doorway. Her father’s hands against the flat of her back as he pushed her on the swings at a park long lost to memory …

When Agnes finished talking, Marigold told her about her own parents. Juan Carlos and Yolanda. A Halloween night three years ago—Marigold waiting to be picked up from the carnival at the rec center, standing alone on the curb in her bat costume, the dusk hanging low and silver-crimson—behind her the carnival stalls and the line to the haunted house, a chill in the air.

In her orange plastic jack-o-lantern bucket were the prizes she’d won—two spider rings, a rubber vampire bat she’d got from the dart toss and had immediately named Bat-a-latta, a green plastic witch pencil top that the carnival barker (a parent of one of her classmates) said would glow in the dark but never did, a small white skeleton the size of her finger with a loop at the top of its skull meant to thread a string or a keychain through, and assorted candy from the haunted house.

She stood curbside until nightfall and until the stalls cleared out and until all the children went home.

That night she slept on the front steps of the rec center and awoke to a foggy morning, her bat costume soaked by dew.

Marigold’s parents were killed in a three-car pileup driving up the 5 to get her. They had borrowed an unregistered car from a neighbor, and neither were carrying identification. It was days before the bodies were identified by Marigold’s aunt Nena who’d been up in Watsonville all month taking care of her ailing father.

Halloween was Marigold’s parents’ wedding anniversary. Their favorite day. The day they saved up for all year to decorate the house extravagantly. The day they went to neighbors’ parties or threw their own, then trick-or-treated with the kids and, by night’s end, fell asleep as a family watching Halloween movies together on the couch.

Marigold’s mother made her and Eddie’s costumes, but the costumes made for Marigold were the best—the best because, like her parents (and because of her parents), Marigold loved Halloween above all things.

Halloween was the day of her parents—their death but also their joy, their love. Neither Eddie nor Marigold looked at Halloween as a day to grieve. This was the day they felt closest to their parents, the day they remembered them the clearest.

Nena often told Marigold that her fixation with Halloween was unhealthy, that you could still remember someone but move on, that you could let go and not walk tied-up with their spirits for the rest of your days.

Marigold did not want to let go. What would letting go mean? Each Halloween since her parents’ passing had been disappointing, uneventful. She held onto hope that every year would be better because to not hope meant that things would never be as good as they once were. Letting go meant letting her parents die—letting them truly die. Marigold had to believe, and she had to hope. There was no other way. She’d learned this without articulating it as such: Sometimes unhealthy things are also necessary and sometimes what hurts us most also sustains us.

When Marigold finished speaking, she saw Norma in the rearview, awake now, face turned to the window, tears running down her cheeks.

As they took the Balboa exit, Agnes turned on the car stereo and pulled the tape out of the deck.

“Davy’s Post-Punk Hits Mix 2003—For My Cousin Eddie,” she read off the label, turning the tape over in her hand as they waited for the light to change. Davy Ramos was Nena’s eldest son, a favorite cousin of Marigold and Eddie and one of Agnes and Gabby’s closest friends. Davy had gone off to college back east in September, but before he left he made copies of the Post-Punk Hits mixtape for Agnes, Gabby, and Eddie. “This tape is gold,” said Agnes. “Check this out, Marigold.” Agnes stuck the tape into the deck, pressed Rewind until it clicked to a stop, then hit Play.

“This is Joy Division,” said Agnes.

The tape hissed with static before a series of somber bass guitar notes introduced the track, followed by a quick patter of drum hits, which repeated in a cycle until the drums and synth and bass joined together and grew steady.

Norma held onto the head rests of the front seats and leaned in between them, listening as the stoplight changed to green—the green casting a pallor on her tear-stained cheeks, her hazel eyes lined in black like an Egyptian queen, her bangs hair-sprayed into a tall wave above her face.

“Ian Curtis is my shit,” said Norma. “My absolute shit.”

As they drove up the Balboa hill into Clairemont, Marigold sunk low in her seat, shut her eyes, smiled, laughed, then cried like she hadn’t in years.