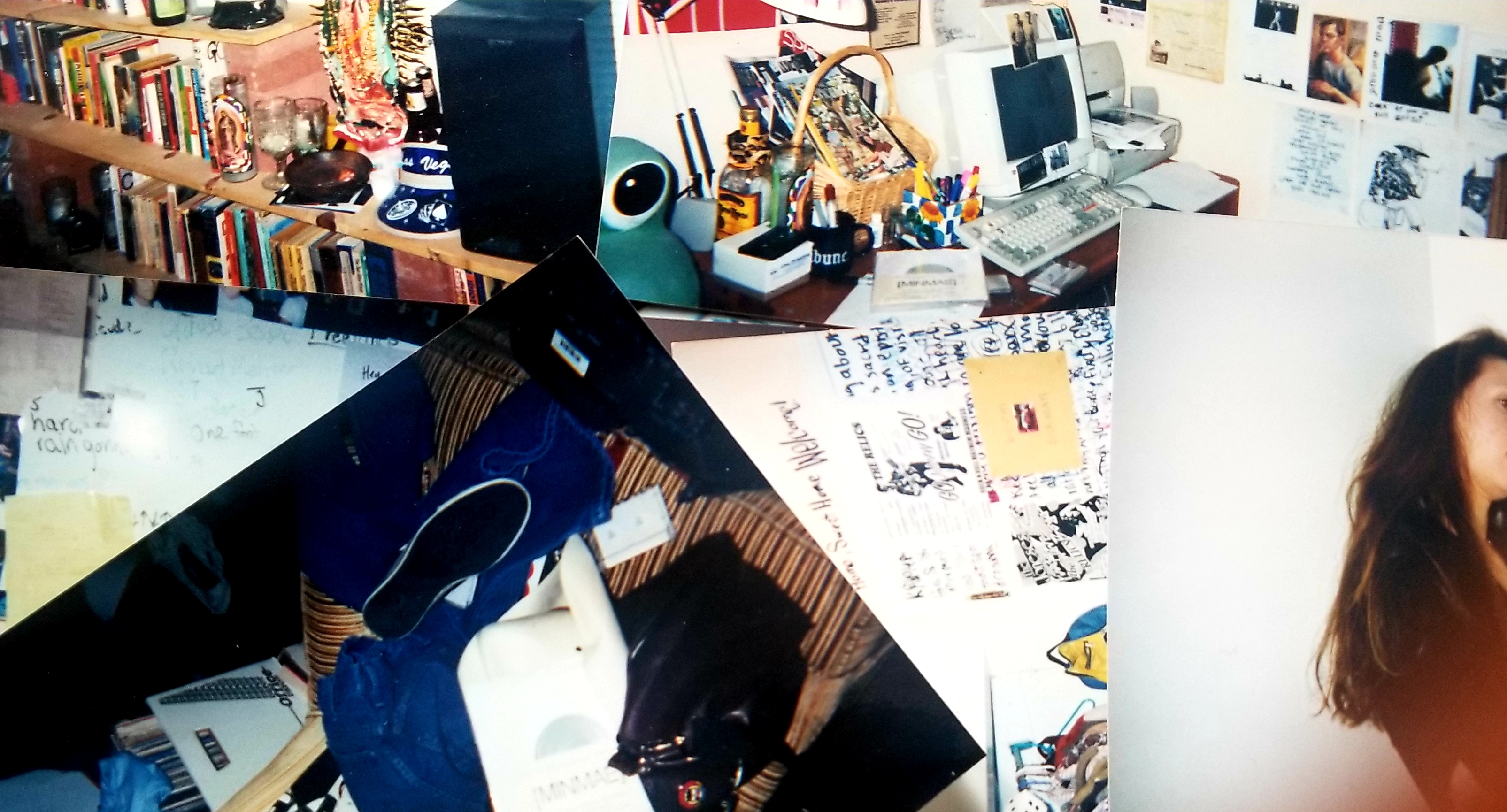 Who Are the Mystery Girls?
A Novel in Serial Form
Chapter 8 of 13, Tavis Gregory and General Tso
By Adam Gnade

Agnes, Marigold, and Norma stood in front of the white picket fence bordering Tavis Gregory’s front yard transfixed by the image inside. Rendered in bright, clear, well-lit detail through the frame of his open front doorway, Tavis, shirtless on the couch, sat snorting line after line of cocaine off the coffeetable, pausing only to take his gun from under the throw pillow, aim it at the wall (to the left or to the right, never straight forward) before returning to his first order of business. Tavis did this as if stuck in a repetition, in a cycle of time, a film loop—pour out (or rather, tap out) the contents of a small plastic bag, push the white powder into a pile with a credit card or a driver’s license (they couldn’t tell from where they were standing), chop the pile into a series of small lines, lean over the table and sniff each line into his right nostril with a rolled-up dollar bill, then the gun—taking the gun from under the pillow, aiming the gun, shutting one eye, replacing the gun, and another bag poured onto the tabletop.

Standing at the gate, Agnes thought briefly of what she’d liked best about trick-or-treating as a child—how you could see into people’s lives for the smallest moment, and maybe they were watching a Halloween movie, and maybe they were dressed up and there were plates of snacks or a bowl of dry ice punch bubbling and smoking on the dining room table or a tray of caramel apples with the sticks pointed to the ceiling like upside-down balloons, and because it was Halloween they were always happy, laughing, talking, music on, or the TV loud. This was something you rarely saw—that happy glimpse into someone’s night, a lit-up frame of life as you stood there in the darkness.

Agnes shut her eyes, breathing in deep, breathing in the scent of nightblooming jasmine. Another relic of childhood. The sweet smell of the flowers at night—a scent like Smarties or the colored rings of a candy necklace.

She opened her eyes again. Saw Tavis. Saw him replace the gun under the pillow. The baggie of coke. The pile, the lines, leaning down over the tabletop.

“Alright ladies, let’s do this,” said Agnes, unlatching the gate and pushing it open as quietly as she could. “Marigold, you stay on the porch. Norma, come in with me, but don’t do anything unless … I mean, unless we have to. Just play it cool, stand behind me, and let me talk.”

Norma nodded her head and Marigold Mmm hmm’d and they followed Agnes up the brick path across the darkened yard to the small white house.

Upon stepping through the doorway, Norma pulled the short-barreled pistol out of the waistband of her Dickies and leveled it at Tavis, and four things happened at once.

Agnes shouted, “Norma! Stop!” her hands held out before her.

Marigold, who had followed them into the room shouted, “We have a gun! Don’t fuckin’ move!”

Unlike the others, Norma didn’t shout but stood confident, relaxed, staring down the barrel of the gun, nodding her head as if listening to music that no one else heard.

Tavis tried to shout but only a terrible, high-pitched squeal came out, like the sound of the pinched neck of a balloon letting out air, as he covered his face with his arms and fell to his side on the couch.

Norma lowered the gun when she noticed Tavis had begun to cry—to sob. “Alright then,” she said, laughing. “I see how this is.”

Agnes took two quick steps and snatched Tavis’ pistol from under the couch cushion, disengaged the clip and let it drop, before ejecting the last shell from the chamber.

“TV,” said Agnes as she kicked the clip under the couch. “Hey, look, Tavis, sit up. Listen. We’re not going to hurt you.” Agnes set Tavis’ pistol on the coffeetable as Norma walked into the kitchen.

Agnes and Marigold heard the sound of Tavis’ fridge opening and Norma rummaging inside.

Tavis sat up, wiping the tears from his face. As he did this, Marigold made note that he was in fact a “small skinny white guy” like the one Arcangelo’d seen in the passenger seat of Gabby’s new car. Tavis had shaved his head a few hours before; some of the hair still caught in brown drifts on his bare shoulders. He wore black baggy pants with a strip of plaid boxers showing above the belt-line, black and white Converse, and his many tattoos were mostly horror-themed—a green brooding Frankenstein’s Monster on his left forearm, a realistic-looking bat in full flight across his chest, skulls, a cartoonish axe, a guillotine, a Misfits logo, a Jason mask, Freddy Krueger leering from his right shoulder, claws extended and dripping blood.

As Tavis began to cry again, Agnes knelt on the carpet in front of the coffeetable and put her left hand on her belly while kneading the muscles of her lower back with her right.

Finally, she spoke. “Look. Tavis. This has been a long fuckin’ day, man. You got anything you want to tell us?”

Norma walked back into the living room with a takeout container of Chinese food and a pair of chopsticks. She sat down in the easy chair by the front door and began to eat.

“Just … just fuckin’ help yourself,” said Tavis, throwing his hands in the air. “You people come into my—”

“Fuck you, white boy,” said Norma. She pulled her gun from behind her and set it flat on her thigh and continued to eat.

Marigold sat down on the carpet by Norma’s feet, glaring at Tavis.

Later, Agnes and Marigold compared notes, neither able to say whether Norma threw the food at Tavis first or stood up and whipped him with the butt of her pistol, but in a matter of seconds Tavis Gregory was both spattered in red, shiny General Tso’s sauce and lying on the floor between the couch and the coffeetable, unconscious as blood soaked into the carpet from his mouth and nose.