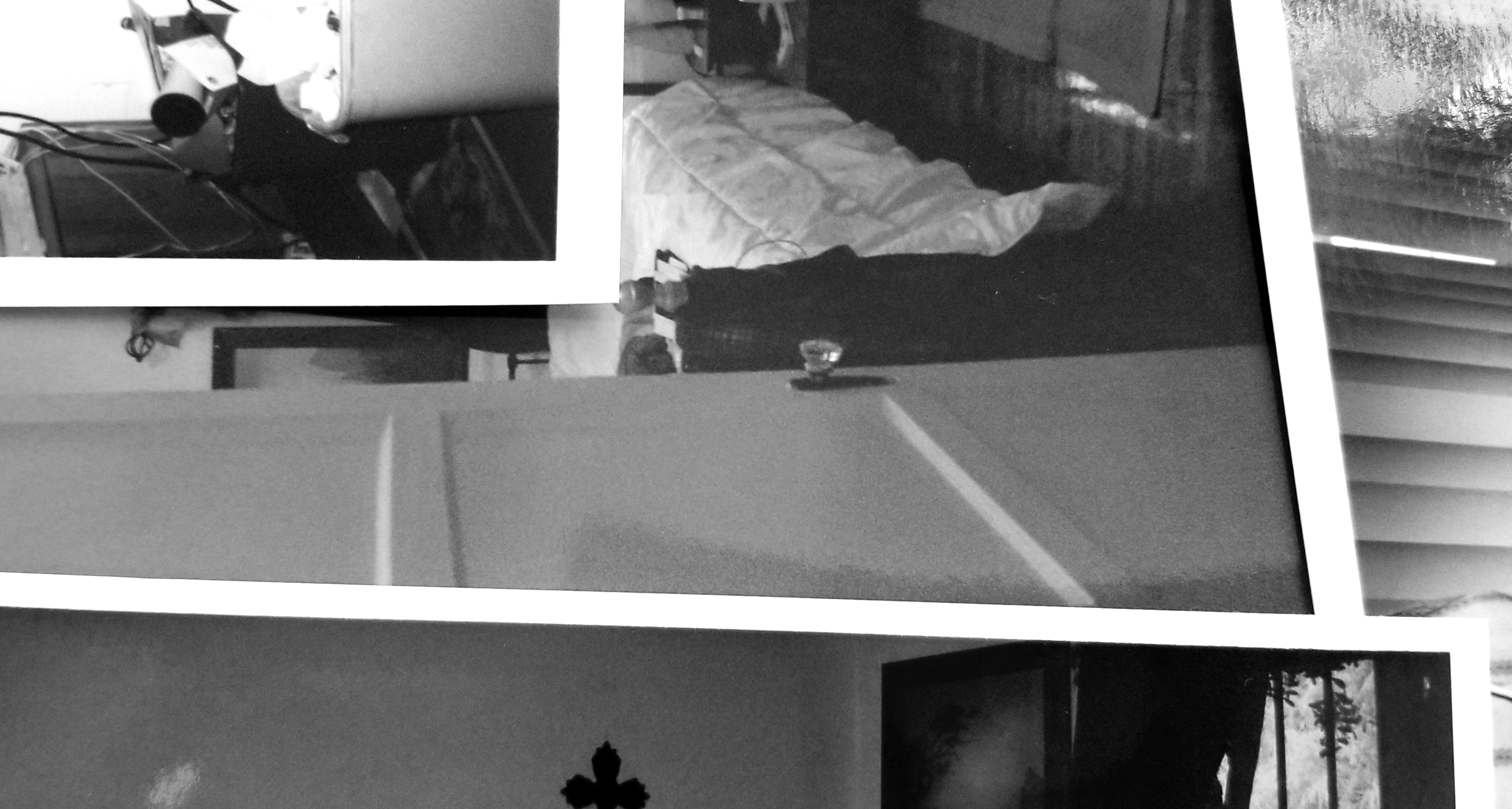 Who Are the Mystery Girls?
A Novel in Serial Form
Chapter 9 of 13, Davy Crockett and El Rey de los Verdugos
By Adam Gnade

When Tavis Gregory regained consciousness that Halloween night, he was lying on his side on the couch, blood dried to a crust under his nose and down his neck, chest spattered in General Tso’s sauce, his hands duct taped behind his back. Through the waves of pain throbbing up and down the front of his skull, Tavis saw his uninvited guests sitting in various spots around his living room. Norma in her Dickies and giant white t-shirt sitting in the easy chair across from the couch, drinking the last can of Pepsi from his fridge. (Then getting up. Walking to the kitchen. Sitting back down with a Fudgesicle from the freezer. Pulling off the paper wrapper and dropping it on the carpet.) Marigold—crosslegged up against the front door in her orange, baggy costume, half asleep, head nodding forward then jerking back up again, and Agnes sitting on the arm of the couch, her pregnant belly like a basketball under her striped tanktop.

“Hey Tavis, hey buddy, you awake?” asked Agnes, leaning forward and tapping his head. “Oh, I’m seein’ signs of life here, ladies. Good morning, sunshine. You started callin’ people bitches and looks like you had a big ol’ accident and hit your poor oopy woopy baby head on the butt of someone’s gun.” Agnes stood up from the arm of the couch with a groan, left hand supporting her lower back, and began to pace in front of the coffeetable as Tavis struggled to a sitting position. “You ready to talk, dude? Got anything to tell us? Right about now might be a good time for that whole ‘YEAH, I did it! And HERE’S HOW!’ confession you just KNOW you wanna make.”

When Tavis spoke, his voice was smaller, flustered, less emboldened than before. “Are you taking me to … wherever you took Gabby … because … because just tell me why you took her … why you’re … why you’re taking me.”

“Look bro, we didn’t take Gabby, and way I see it, all signs and lotsa careful research point to YOUR ass bein’ the creep in question. You got an executioner’s mask tucked under that couch?”

“Listen, you b— listen, I don’t know what happened to Gabby. She left last night after we had a fight and I haven’t seen her and I don’t know if she’s gonna come back or if she’s gonna, like, show up dead on the fucking news or—”

“Last night she– first you gotta tell your friend to stop hitting people with guns.”

Agnes looked at Norma, who smiled darkly as she flicked the Fudgesicle’s stick at the wall, then turned back to Tavis. “Yeah, that’d be a no.”

“Do I? DO I know you, Tavis? I’m not sure. I thought you were the world’s most chillest drug dealer and my best friend’s nicest, sweetest boyfriend in history but … nope, you’re lookin’ pretty dastardly at the moment. So, talk. Unless you want me to call up Norma’s cousin the friendly neighborhood DEA agent to come and check out your … uh, your business here.” Agnes nodded at the cocaine on the table. “Not to get all hardboiled on you, but we could ruin your sweet life with one phone call, Scarface.”

“Alright, shit. Alright. Last night Gabby and I … things were going fine. I got us some dinner from Golden Dragon because it’s the only Chinese she’ll eat and we were watching … fucking I don’t even remember what we were watching … we were watching a show or something and drinking tequila and gettin’ stoned, and like a dumb ass I said something about her new car … because she was bein’ all sketchy ‘n’ shit and not sayin’ where it came from … and you know as well as I do that Gabby doesn’t have money for shit like that and all the sudden I’m … I shouldn’t have, I know I shouldn’t have, I know, I know, I KNOW, but I was pretty fuckin’ high and all the sudden I started accusing her of spending money that was supposed to go to her dad and she fuckin’ threw her plate of fried rice at me—”

“Haha, white boy you got a type,” said Norma pointing at him.

Marigold laughed, looked at Norma then back at Tavis, and said, “YEAH, white boy.”

Tavis glared at Norma and Marigold then looked down at the coffeetable in front of him. The baggies of coke. Three lines cut. The rolled-up dollar bill. Trash. Dried bits of fried rice and scrambled egg. An orange BIC lighter. Various coins. The empty pistol. His driver’s license and a younger, heavier, longhaired version of himself staring back up. “So … so, Gabby started to leave and I shouldn’t have … I shouldn’t have, but I grabbed her arm and she pulled away then she hit me and I hit her back and I guess it was harder than I thought because she fell on the ground and she didn’t get up and—”

Agnes’ world clenched up tight as the sound of the room cut off to a hollow, gasping breath like a seashell held up to your ear. “Tavis … Tavis, you better not be telling me what I think you’re—”

“I didn’t kill her, Agnes! I didn’t. It felt like a hundred years, but she came to and she looked up at me and she was like, ‘Fuck you then, Tavis. I’m going to Davy Crockett’s house because at least he can take care of me’ and I just—”

“I don’t know. King of the Wild Frontier. Died at the fucking Alamo.”

“Dude, I know who the … the historical … like, frontier Disney movie Davy Crockett is, but … who was Gabby talking about?”

“I don’t know. I don’t fucking know, Agnes. All I know is there’s some dude out there she calls Davy Crockett and apparently he can take care of her whatever that means and that was the last thing she said to me and now she’s gone who the hell knows where in some psycho executioner’s dungeon or something.”

“Why’d you trash your place?” said Agnes, waving a hand at the wreckage of the living room.

“I tore it apart trying to find something, a clue … anything that might help me figure out what happened to her.”

“I bet gettin’ super coked-up helped, huh bro?” Agnes made the hang loose sign with both hands and shook them at him.

“Listen, the only thing I found that I thought might mean something was an Off the Record receipt in her coat pocket with a phone number and some Spanish written on it and a red heart drawn around it.”

Agnes picked up the food-stained receipt and read the writing to herself: El Rey de los Verdugos.

“I thought maybe … like with the heart drawn on it and everything, maybe that was Davy Crockett’s number.”

“Yeah, Agnes, of course I called the number. What, do you think I wouldn’t call the fucking—”

“Stay on task, bro. Remember how much your face loves to smash into Norma’s gun and how funny it is afterward. What happened when you called the number?”

“It was for a fuckin’ costume store or something. They didn’t know anything about Davy Crockett or—”

Agnes turned and walked to the door. “Come on, girls. Let’s go. I know who took Gabby.”