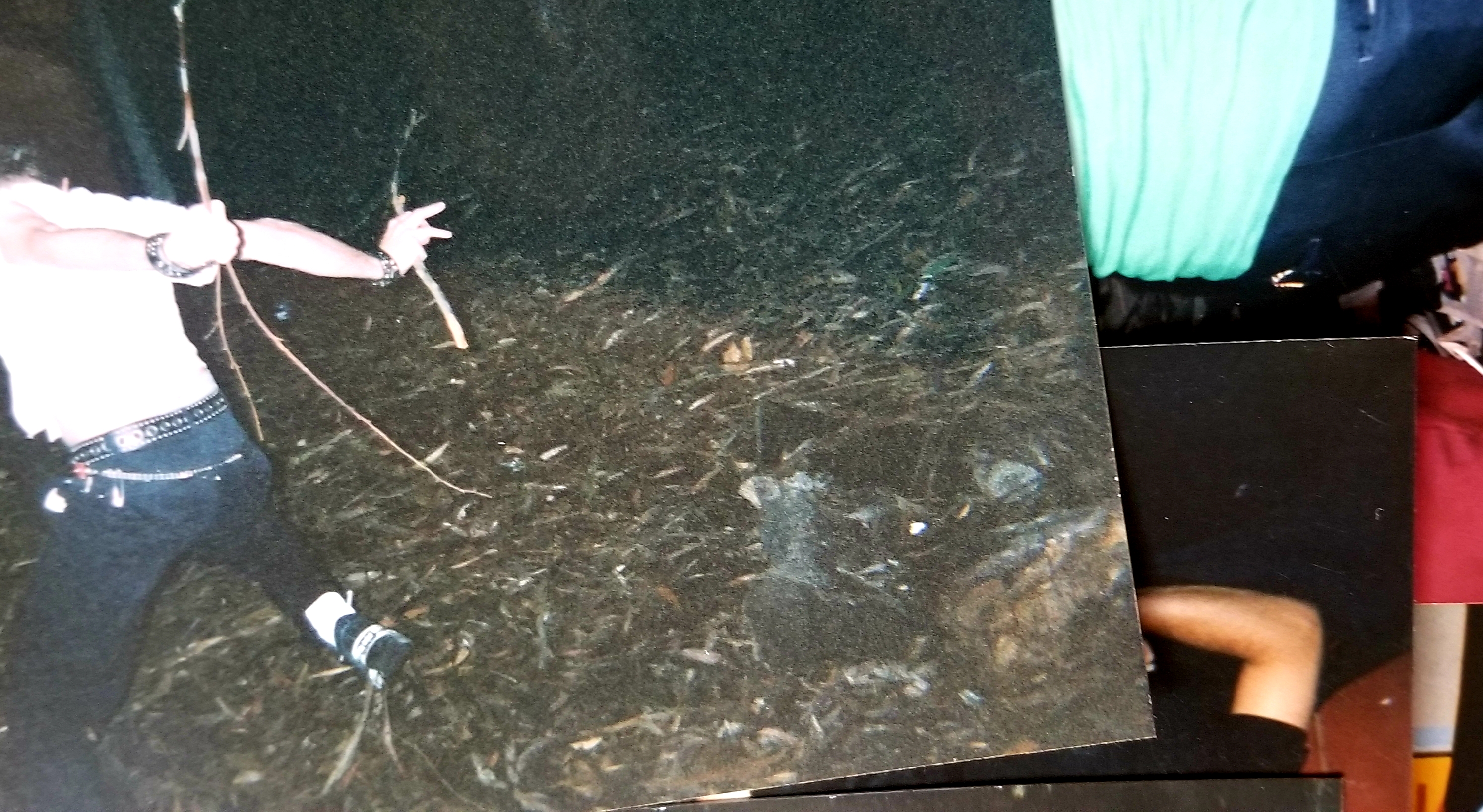 Who Are the Mystery Girls?

A Novel in Serial Form

Driving back down the Balboa hill under the dull yellow streetlamps, Agnes told Marigold and Norma her suspicions and what she planned to do, and then no one spoke as they drove west, away from Clairemont, the lights of P.B. shining below them in the darkness and beyond that the great black flat spaces of Mission Bay and the Pacific Ocean. Agnes thought of what she knew, what she felt she knew, what she believed she knew. Norma stared out the window at the hill of houses to the right of the car, the trees and brush of the canyon wall flat-gray with the moon behind the clouds and thought of her mother. Marigold, eyes forward, the headlight-lit road snaking out before and below them, thought of home, of her parents, and as she began to turn over the details of their deaths for the second time that night (a count innumerable over the past four years) she saw a familiar figure walking up the hill along the ditch toward them.

Marigold leaned forward against her seat belt. “Agnes, look, is that the elf?”

Norma leaned in between the seats. “I saw that girl at the party. Who is that?”

“That’s someone we hate’s fiancée,” said Agnes, pulling over to the side of the road as Marigold rolled her window down.

Debsey, crying, wiping her face, walked past the car, determined, muttering to herself, before Marigold called out to her.

Debsey turned and walked back to the car, placed her hands on the window frame, and looked in.

“Wait, what? What are you girls doing in … what’s going on?”

Debsey looked up the hill and then down the hill and shrugged. “I don’t even know what I’m doing. Damien and I broke up.”

Driving west down Garnet Avenue in Pacific Beach, Debsey filled them in on the events of the evening.

“After you two left the party, I asked Damien about Gabby and about why they’d had this feud. At first he was dreadfully cagey about it.”

“Dame’s been that way since I’ve known him. Hard to pin down. Wouldn’t give me his flat number in London at first when we started dating and never told me where he was going when he went somewhere. As if it were some sort of dire threat to national security if I knew whom he was hanging out with.”

Debsey continued. “At the party Dame kept drinking, whilst I stopped, strategically of course, and after a bit it all began to come pouring out. About the photos of Gabby’s he stole. The blackmail. All the rest. All the petty, twisted, unbecoming things he did to her—and to you, Agnes—over the years. I don’t imagine he’ll remember this tomorrow, but he told me all about … everything.”

“Everything is a lot,” said Agnes.

“Indeed,” said Debsey, quietly. “Everything is quite a lot and much more than I could take, so I—” she held up her left hand “—I got up … and I know this was excruciatingly childish of me, but I got up and walked over to the fire that everyone was standing around and tossed his engagement ring in.”

Norma put her hand up for a high-five and Debsey laughed and wiped her eyes then hit her hand against Norma’s.

“That’s very Lord of the Rings of you,” said Agnes. “I approve.”

“’Out of doubt, out of dark to the day’s rising I came singing into the sun, sword unsheathing. To hope’s end I rode and to heart’s breaking; Now for wrath, now for ruin and a red nightfall,’” said Debsey.

“I simply couldn’t go on being with someone who could do such things.”

Marigold looked into the backseat and gave Debsey a thumbs up and said, “Yeah, you don’t need him.”

The sidewalks of Garnet Avenue were crowded with people walking from bar to bar and drinking at tables in the courtyards of breweries and in the open windows of sports bars and sushi restaurants.

“P.B.’s fucking gross,” said Agnes as they sat in traffic. “We should’ve taken Grand. Garnet is like beach Vegas. Look at all those motorcycle cops. Douche cops for drunk douche bros,” and then she sang, “Douche cops, douche cops, what you gonna do? What you gonna do when they come for you?”

“Norma, you really have a cousin who’s a DEA agent?” asked Marigold, looking between the front seats.

“Naw, Aggie made that shit up.”

Agnes laughed. “Cousin cop is always a good powerplay. I’ve used that a few times on dipshits like Tavis Gregory and I will most definitely use it again.”

Marigold sat up in her seat and rolled her window down furiously.

Marigold snapped her seat belt off and climbed halfway out the window and screamed “LOSER!” She gave someone on the sidewalk double middle fingers before dropping back into her seat, laughing. “Agnes! Look! It’s my stupid brother!”

Eddie Ramos stared at the car as he knelt by the feet of his girlfriend AnnaLucia in front of P.B. Bar and Grill, her left hand in both of his, a thin diamond ring slid halfway up her finger. Eddie mouthed the words, “What?! Marigold?!” and Marigold gave him the middle finger again.

“Dude, is your brother proposing?”

“Yeah, Agnes, look at him. LOSER!” she shouted again.

Norma rolled down her window and shouted it too and Agnes laughed and hit the horn twice and stuck her middle finger out the window, and then they drove forward along with the traffic, Eddie and AnnaLucia staring at them in disbelief.

“Did we just ruin your brother’s life?” asked Agnes.

“That’s your brother?” asked Debsey from the backseat. “Why would you do something like that?”

“Man, San Diego’s a small fucking town,” said Agnes, shaking her head as they stopped at another red light. “Should we feel bad about that? Ruining Eddie’s big night? I kinda don’t.”

Agnes put her signal on and they took the last left before the shore and drove down Mission Boulevard past more drunken crowds, more cops, then houses, motels, beach apartments, surf shops and bikini stores closed up for the night.