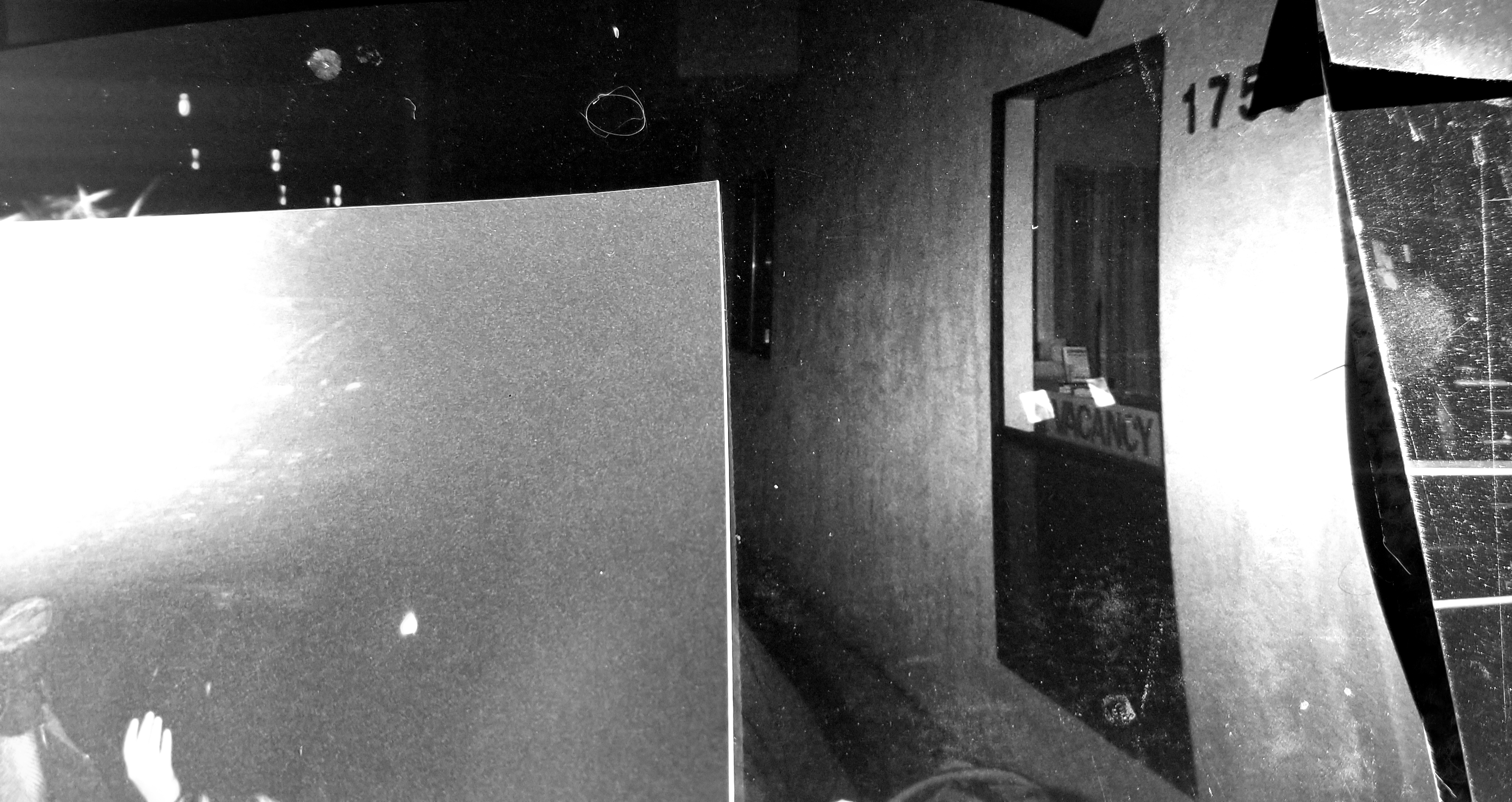 Who Are the Mystery Girls?
A Novel in Serial Form
Chapter 11 of 13, Salem Court and the Heart of Agnes McCanty
By Adam Gnade

Sometimes the person doing you the most damage is the one you least expect, the one you’ve forgotten about or held too close and believed too much in or pushed away to the very edge of your life. Agnes thought of this as she, Marigold, Norma, and Debsey walked along the seawall, the beach a gray flat nothing under the moon and the sea black and loud, a steady churning hiss like a breath breathed out, and a ceaseless crash and muffled boom as the waves broke on the sandbar, the whitewash rolling shoreward in pale silver lines.

Agnes, Marigold, Norma, and Debsey walked along the Mission Beach boardwalk past signs for the Courts. Windemere Court where Gabby’d once lived with someone from Crash Worship. Verona Court. Venice, Vanitie, Toulon, Seagrit …

As they passed the white stucco condos and tall, modern, bright-lit apartments facing the sea, Agnes thought of the beach house on Salem Court. The parties. The late nights just the two of them talking and getting high on the upstairs balcony. The fog in the morning as they sat on the porch in lawn chairs hungover and drank coffee with a shot of Tortugas rum and watched the world go by on the boardwalk. Staring at the sea from his bed. Staring at the sea from the small kitchen window. The love and also the end of love. Salem Court.

And now the house. His house—a white cube just feet from the sea wall’s sidewalk, two stories, Brutalist she always thought, built in the early 1980s by a notorious cocaine dealer who vanished off the coast of Ensenada in ’93 and reappeared dead in the trunk of a Buick in National City last summer. The exterior of the house had hard, bare industrial lines and angles, a wall of west-facing windows (now black with the lights out) and a glorious and unimpeded view of the Pacific from most rooms. When his uncle Carl died earlier in the year, he got everything, the house and two others, the chain of Halloween stores, and more money than a man in his 20s with no goals, firm ethics, or plans should be allowed. More money than anyone should have, Agnes thought now, standing on the boardwalk outside the small, gated yard.

Agnes took a deep breath and held it as she opened the short, wooden gate to the yard then walked up the stone pathway to the porch, Marigold, Norma, and Debsey close behind, Marigold holding her (Agnes’) hand tight.

Standing on the porch in front of the matching canvas lawn chairs with the boardwalk and dark sea to her back, Agnes thought of all they’d been through that day—the news of Gabby’s kidnapping, searching her apartment and finding the money, the party at the Pirate Radio house, the fight with the Klantee girls stopped by Arcangelo Ramirez just as it began, Damien Bixby’s sudden and unexpected about-face, Tavis Gregory’s ruined living room and his bloodied face, and now this. All of it led to this.

Agnes pressed the doorbell button and it chimed twice, but nothing happened. Nothing spectacular. Nothing like an ending. No one came to answer the door. No sounds of life from inside. No lights switching on.

She rang the doorbell repeatedly for a minute and knocked as hard as she could, then rang it once more to be sure, after which she and her friends walked away—back down the stone path through the small yard with its AstroTurf lawn and stone statues of turtles, pigs, and frogs, presents from a relative Agnes vaguely remembered dying in a helicopter crash two years back. An aunt? A cousin? Someone called Cathleen or maybe Katharine with a K.

Just as Agnes unlatched the gate, the front door swung open and she turned at the sound to see his hulking silhouette leaning against the frame of the doorway. Him. Steven Boone, her ex, the father of the girl she carried.

Steven wore an old yellow bathrobe tied at the waist. Barefoot and unshaven, he looked as though he hadn’t slept in days; a lock of black hair falling limp across his forehead like “some greasy, shitty Superman” she would tell her therapist years later.

“Well. You came all this way, didn’t you?” he said, tired, deep-voiced. “Don’t wanna let you down. Make sure Agnes gets what Agnes wants.”

As if pulled by magnets, she walked toward the open doorway as Steven stepped out of it and into the darkness of the front room.

Inside, Steven lowered himself to the couch with a groan and lit a joint as Agnes and her friends stood in the open doorway; the cherry of the joint flashing hot as he drew on it, the only light in the room, a red cinder floating in front of his mouth.

“Come on in. Sit down. Don’t just stand around like you’re selling or stealing something,” he said in a slow, husky, patient drawl neither Southern nor natural. “Make yourselves at home. Trick-or-treat, trick-or-treat. What’ve we got? A pumpkin, an elf, a … haha, a chola, and a hard-to-reach pregnant girl who doesn’t pick up her goddamn phone after months of me calling and calling and calling and— well, I’ve seen better costumes. Real C-minus work, ladies.”

Agnes, Marigold, Norma, and Debsey stood in the dark room, the open doorway to their backs, Steven Boone impossibly large on the sagging couch, the burning end of the joint moving from his mouth to his bare knee, where he ashed on the floor.

“Well, Agnes, aren’t you gonna say something important? This is the big moment. Come on, Agnes, you’ve never been at a loss for words before. This just ain’t like you. Let it fly. Hit ol’ Steven Boone with your best shot.”

As Steven stared at them in the darkness and smoked, Agnes felt the room pressing in on her, engulfing her, pulling the oxygen from her lungs.

When she finally spoke, it felt like breaking through a wall of ice to reach the air above a frozen pond.

“Agnes, I’m disappointed in you. It took you how long? You’re losing the magic touch, kiddo. I thought you’d be here by noon, six-shooters a-blazin’ on a white horse as tall as the sky. What it is, eight, nine, later … can it be ten? I must confess I’ve been sleeping. Again I put so much faith in you and again you’ve let me down. Oh hummingbird, where’s the shock and awe?”

“Steven. Tell me where Gabby is.”

“Ahhh, the big, glorious, showstoppin’ reveal. The grand moment in the great war of today.” Steven reached for the lamp behind the couch and pulled the chain and the large, empty room flashed to light. He motioned with his hand and a slight bow of the head at Gabby Martinez asleep her side in the corner with a small plaid blanket thrown over her. “Behold, this lonely hunter’s finest trophy—the heart of Agnes McCanty.”